Home > Back to Search Results > From the Confederacy... Capture of Cedar Keys...
Click image to enlarge 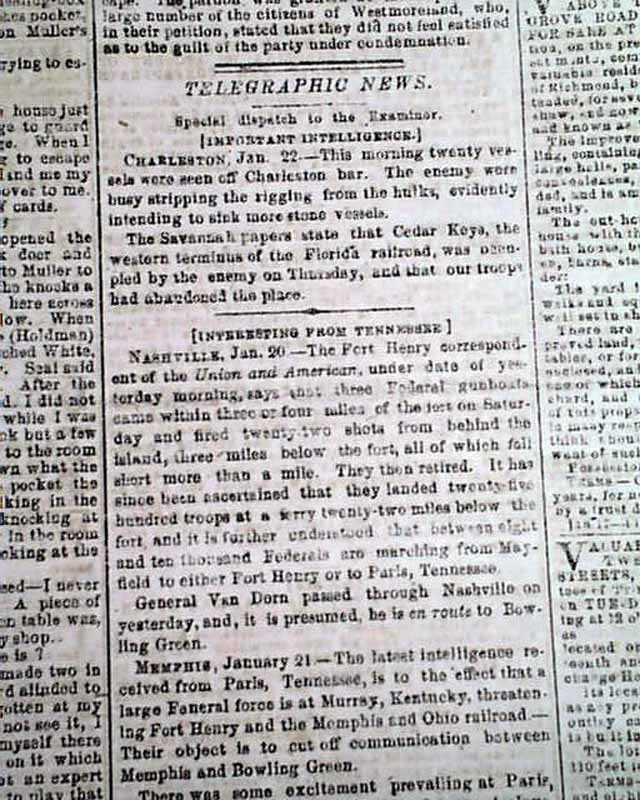 From the Confederacy... Capture of Cedar Keys...

* Attack on Cedar Key, Florida
* From the capital of the Confederacy

Half of the front page is taken up with ads while the other half deals primarily with politics, with: "The Norther Congress", "Indiana Democratic State Convention" plus there is also: "Rebel Fortifications at Bowling Green".
Page 2 contains the always interesting editorial, this one focused on the need to "...devise some plan of importing such articles into the South as are required by the public wants..." (see for beginning). Page 2 also has: "Movements & Spirit of the War", "Important Rumours From Washington", "General Jackson's Command", "The Manassas Railway Connection", "Payments Due Deceased Soldiers", "A Scene in the Legislature", "Kentucky", "Western Virginia" plus much reporting from the "Legislature of Virginia".
Page 3 continue with political reporting, as well as "Telegraphic News--Interesting from Tennessee--Federals Reported to be at Murray, Calloway, Kentucky--Captain D. S. Martin Found Guilty--Capture of Cedar Keys, Fla.--Capture of a Schooner" and various Acts from the Confederate Congress, which continue on to the back page as well.
Four pages, never bound nor trimmed (desired), very nice and in clean condition. A nice newspaper from the capital of the Confederacy, the city to which all Civil War news would be sent.