Home > Back to Search Results > Naval battle off Mobile...
Click image to enlarge 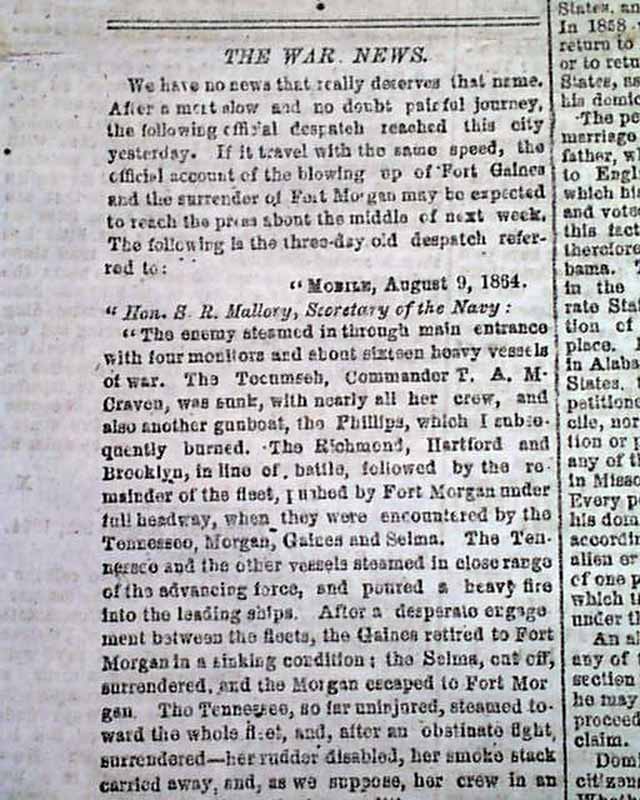 * Battle of Mobile Bay - Alabama
* Confederate States Navy vs. David Farragut
* From the capital of the Confederacy

A nice newspaper from the capital of the Confederate states. The front page includes under "The War News" a letter from the "Confederate States Navy" a report from Mobile beginning: "The enemy steamed in through main entrance with 4 monitors & about sixteen heavy vessels of war. The Tecumseh...was sunk with nearly all her crew..." with more, and ending with: "The enemy suffered severely and he requested permission to buy his dead." (see photo) It was during this battle of Mobile that Yankee admiral David Farragut said "Damn the torpedoes! Full speed ahead!!" (likely not in these words). This report is followed by a list of the "Federal Forces" with tha name of each vessel (see photo). The ftpg. has other reports including: "Casualties" of the 34th Virginia Infantry, "City Intelligence" "Bushwackers In Western Virginia" and other smaller items.
The back page has the always interesting editorial, this one beginning: "Whatever may turn out to be the meaning of the fact, the fact itself begins to shine out clear--that Abraham Lincoln is lost; that he will never be President again; not even President of the Yankee remnant of States...The obscene Ape of Illinois is about to be deposed from the Washington purple & the White House will echo to his little jokes no more..." with much more (see for portions). Also on the bkpg: "Latest News from the North" "Execution of Beasley--Grant's Mining--Floyd--Reflections" " and a few other smaller items relating to the war.
Complete as a single sheet newspaper with a one column masthead, typical of newspapers from the South late in the war as most paper mills were in the North. Nice condition.