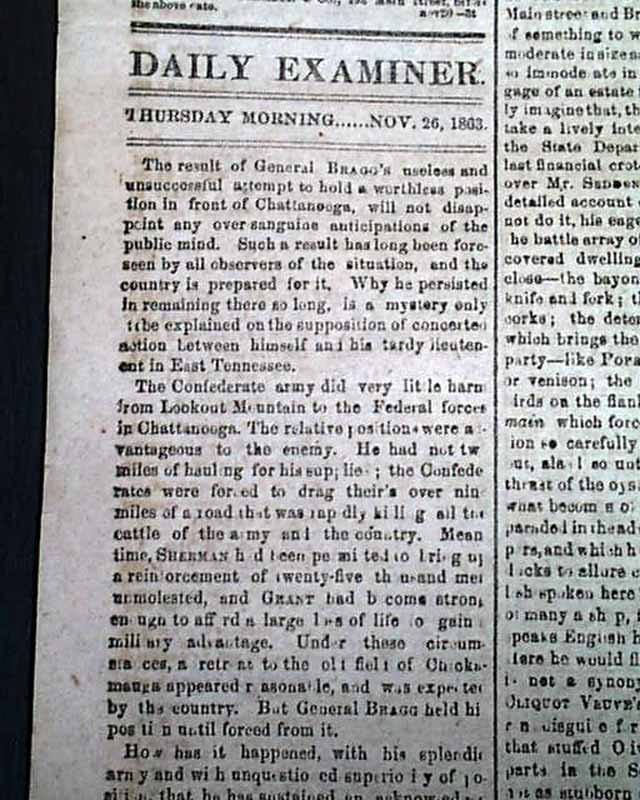 A very nice newspaper from the capital of the Confederate states. The front page has some advertisements but is dominated by various news reports, including items headed: "The News" "The Courts" "City Intelligence" "Battle at Lookout Mountain" which is a short dispatched signed in type by: Braxton Bragg (see images), followed by yet another brief dispatch signed by him as well (see images). Also: "Affairs At Chattanooga" "Capture of Yankees by Mosby" "From Charleston" and other smaller items.
The back page has much news reporting as well as the always interesting editorial, this one beginning: "The result of General Bragg's useless and unsuccessful attempt to hold a worthless position in front of Chattanooga will not disappoint any over-sanguine anticipations of the public mind...The Confederate army did very little harm from Lookout Mountain to the Federal forces in Chattanooga..." with much more. Also on the back page: "Late Northern items" "The Situation at Knoxville" "From Vicksburg" "Southern Items" "General Bragg and the Exchange of Prisoners" and other items.
Complete as a single sheet newspaper with a full banner masthead, measuring 24 x 17, and in very nice condition.