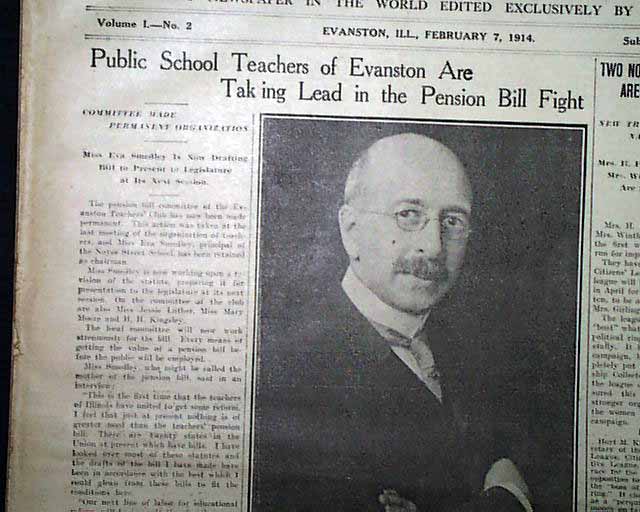 
THE NORTH SHORE REVIEW, Evanston, Illinois, Feb. 7, 1914  Printed in the masthead: "Only Newspaper In The World Edited Exclusively By Women". This is a quite  rare newspaper themed on women's suffrage and other issues of concern for women. A relatively short-lived newspaper as it lasted only for 114 issues before closing. I can find nothing about this title online, the Illinois Newspaper project has no record of this title, and it is not to be found in Gregory's "Union List of American Newspapers". This is issue #2.
The ftpg. has the headline "Public School Teachers of Evanston Are Taking lead in the pension Bill Fight" and includes a photo of H. H. Kingsley as well another article "Big Registration Alters Woman's Suffrage Aspect". Inside pages have much on women's issues including: "Women Are My Best Supporters" - Sherer"; "Motherhood Is Not Woman's Greatest Mission -- Zona Gale"; "Pennsylvania Women are Organizing" and much more.
Sixteen pages, tabloid size, very nice condition.