Home > Back to Search Results > The burning of New York, and more...
Click image to enlarge 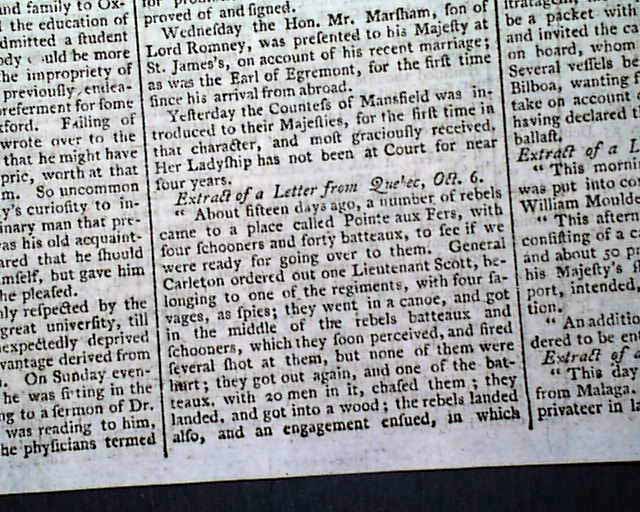 The burning of New York, and more...

Page 2 has some Revolutionary War-related items including: "...rebels came to a place called Pointe aux Fers...to see if we were ready for going over to them. Gen. Carleton ordered Lt. Scott...with 4 savages as spies...fired several shot at them...an engagement ensured in which 15 rebels were killed...Gen. Burgoyne has passed the Lakes in the interior parts of America & at this time must be within a few days march of New York...Accounts are received that Gen. Washington had written to the Provincial Congress, that 3 regiments...had left the army in a body upon the landing of the King's troops in Kepp's bay..." and more.
A lengthy article is titled: "A Sketch of the Character of the once famous & Still respectable Paoli", the celebrated Corsican general.  Near the back is some nice reporting on events near New York, one account noting: "...there has been a smart engagement at King's Bridge between the King's forces and the Provincials, in which the latter were defeated."  Also reported is a fine account of the great fire which destroyed over 300 buildings in the city, and which includes: "...many of the villains were seized with matches in their hands ready to set fire to the houses...the Continental Congress having given express orders to burn this city if not tenable against the British...executed to prevent the King's troops from having any benefit by the city...three delegates from the Congress, Dr. Franklin, Adams & another, waited on Lord Howe with a flag of truce...his Lordship turned from them with the contempt they deserved..." and much more.
Much fine reading in this issue. Eight pages, 8 1/2 by 11 1/4 inches, very nice condition.