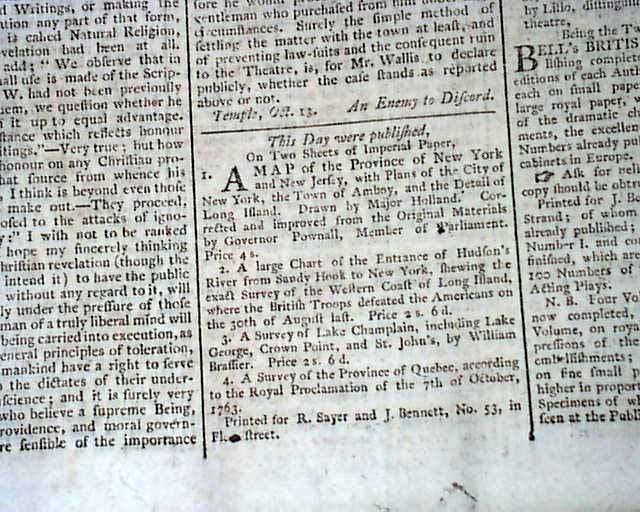 Included is a noted that: "This Day were Published" various maps of the American colonies as noted.  "London" on page 6 reports that: "…on the 8th New York was attacked by our men of war, etc." and that: "…Gen. Howe had gone to the King's Bridge to cut off the retreat of the rebels…" It also mentions an: "…evacuation of New York by the Rebels…" and that "…Gen. Washington was gone to Philadelphia to consult with the Congress what further steps were…to be taken for the security of the colony, and Putnam was to have the command in his absence…" and more.
The back page has a report beginning: "It was currently reported this morning in the city that General Howe had got possession of New York but with a very great loss on both sides…". It also reports that Mr. Arnold: "…is appointed to the command of the marine force of rebels…". The report continues mentioning "a letter from Long Island" which discusses the evacuation order issued by Mr. Washington because: "…a bombardment and attack may be hourly expected…".
Eight pages, 8 1/2 by 11 1/4 inches, very nice, clean condition.