Home > Back to Search Results > The Battle of Long Island, on the front page...
Click image to enlarge 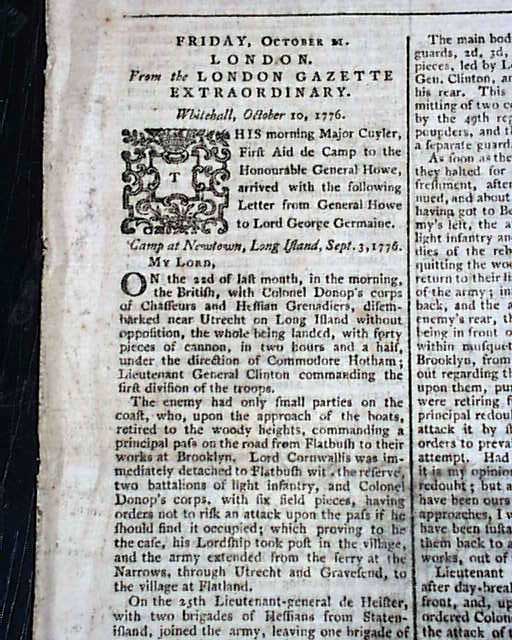 The Battle of Long Island, on the front page...

A terrific issue, particularly for display, as the entire front page is taken up with the report of the Battle of Long Island as reported in "The London Gazette Extraordinary" of October 10, 1776. "Extraordinary" issues were published at irregular intervals to report significant news reports which came to the printing office between regularly scheduled publications.
This lengthy report is signed in type by: W. Howe, commander of the British forces which inflicted a crushing defeat on Washington's army led by General Israel Putnam & others. During the night Washington withdrew the colonial forces from Brooklyn Heights to Manhattan.
Considerable detail as can be seen in the photos below. The very end of the report includes the: "Return of Prisoners taken on Long Island, 27th August, 1776" which carries over to take two-thirds of page 2 as well (see for portions).
The balance of page 2 is a letter from Lord Viscount Howe, commander of the British naval force in America, with further details of the Battle of Long Island which carries over to the next page as well.
Also within this issue is a: "Letter from an Officer at New York, Sept. 6" which related to the Battle of Long Island as well. And there are additional war-related reports also, too numerous to mention here.
Eight pages, 8 1/2 by 11 inches, very nice condition.