Home > Back to Search Results > Battle of Long Island... "Riding the rail" & other tortures...
Click image to enlarge 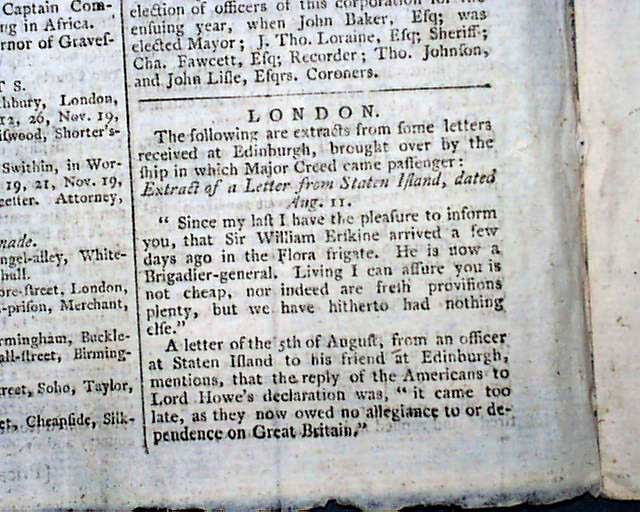 Battle of Long Island... "Riding the rail" & other tortures...

Page 3 has a nearly half column letter from Chamblee with reports on events in the Crown Point & Lake Champlain vicinity (see photos). An inside pg. has reports concerning the British in New York, including: "...that they had done their utmost endeavours with the Congress to bring about a reconciliation but in vain, & therefore they were preparing to attack New York...that the army was then preparing for action but that it would take up many days before they could begin...no time would be lost in proceeding upon the operations of the campaign..." with a bit more. But by far the most historic report is the rather succinct account on the back page concerning the Battle of Long Island (see), which includes: "An express is arrived from Lord Howe, giving an account that on Aug. 22 he had obtained possession of Long Island with the loss only of 50 men killed & 200 slightly wounded. Of the Provincials 3500 were killed upon the spot & above 1000 taken prisoners, among whom are Lord Sterling & Generals Sullivan & Udal. The Rebels on this defeat were retreating from New York with the utmost precipitation...It is not expected that the provincials will set fire to New York...All the artillery of the Provincials were taken..." with a bit more. A few other tidbits on the war including: "...the most horrid cruelties are inflicted on the American Loyalists. They are driven from their homes on refusing to take the oaths of allegiance to the Congress...They oblige a man to ride on the ridge of a sharp rail, full of splinters, carried by two men who take care to shake him so as to bruise him in a most shocking manner. That of carting is another species of torture; it consists in exposing the unfortunate sufferer to ride on a wooden horse, fixed in a cart, & to be pelted by the populace while he is in this distressed attitude." Another item reading: "Many of the zealous friends of liberty, such as have stood forth against American taxation by a British Parliament, are imprisoned & otherways persecuted for refusing to renounce their allegiance to his Majesty."
Eight pages, 8 1/2 by 11 1/4 inches, very nice condition.