Home > Back to Search Results > Much correspondence from America...
Click image to enlarge 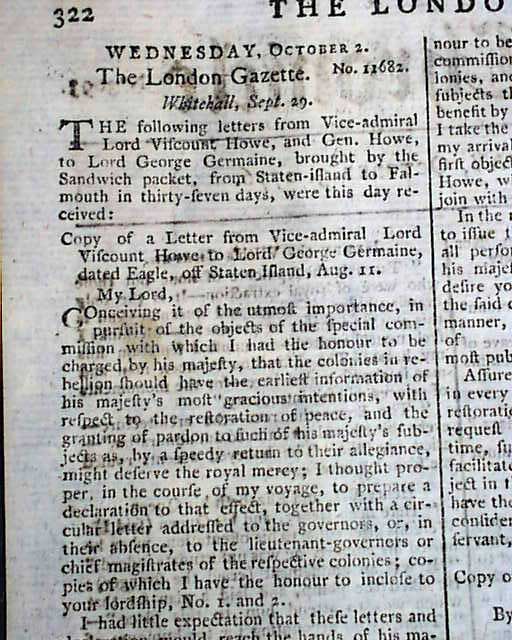 Much correspondence from America...

An entire page is taken up with correspondence from Vice Admiral Howe and General Howe plus some papers from Congress. Portions of the letters include: "...the colonies in rebellion should have the earliest information of his majesty's most gracious intentions with respect to the restoration of peace & the granting of pardon..." and another letter includes: "...meritorious services of all persons who shall aid & assist in restoring the public tranquility in the said colonies...that pardons shall be granted...". The note from Congress includes: "...a copy of the circular letters & of the declaration they included from Lore Howe to Mr. Franklin, Mr. Penn...sent to Amboy by a flag, & forwarded to Congress by Gen. Washington, be published in the several gazettes...the few who still remain suspended by a hope founded either in the justice or moderation of their late king may now at length be convinced that the valour alone of their country is to save its liberties."
More reporting on military events near Staten Island are on the facing page. Plus a few other mentions concerning America in this issue.
Eight pages, 8 1/2 by 11 inches, very nice condition.