Home > Back to Search Results > Death of this newspaper's editor...
Click image to enlarge 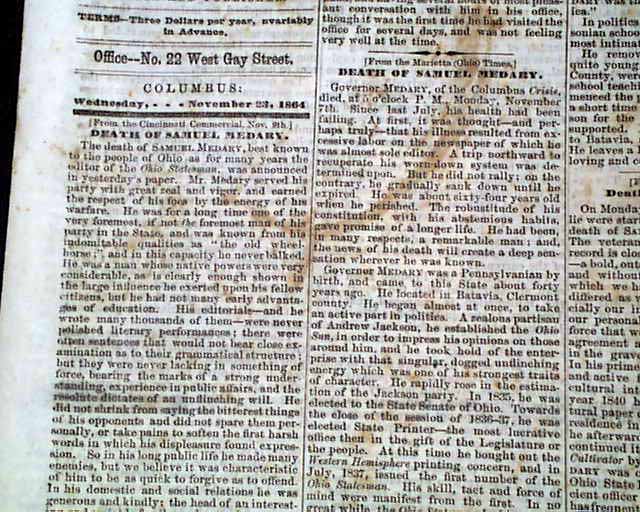 Death of this newspaper's editor...

The ftpg. begins with: "Death of Samuel Medary" with an additional six ftpg. articles with similar headlines. He was the editor of this newspaper and a former governor of Ohio.
Other items include: "The Result of the Presidential Election" with the votes per state; "Official Orders by the President-- The Resignation of Gen. McClellan Accepted..." "Peace on the Basis of the Extermination of Slavery" "Lincoln Congratulated--He Speaks". "Message of President Davis" takes over a full page and is signed in type: Jefferson Davis; "Proclamation of Thanksgiving" is signed in type: Abraham Lincoln.
This interesting title was described as "The Hottest Rebel Sheet to be found in the North or the South". It opposed the war and attracted the hatred of the Republicans and the Lincoln administration. It insisted that slavery could not be prohibited by law. So obnoxious was this paper to Unionists that it was denied circulation in some cities. In 1863 the press was raided by a hateful mob.
Eight pages, never bound nor trimmed so it folds our to one large sheet, some staining to the ftpg., good condition.