Home > Back to Search Results > Arriving at Staten Island... Prisoners of war...
Click image to enlarge 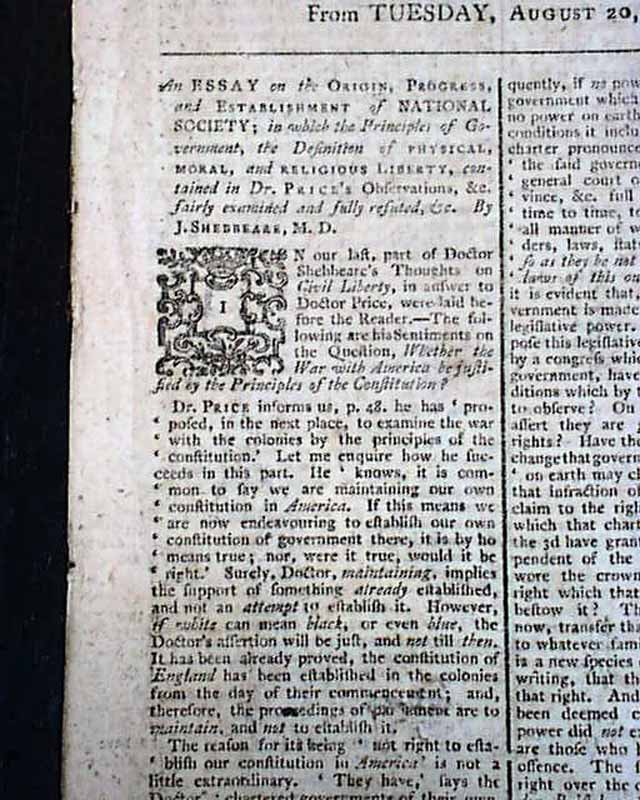 The entire front page and a portion of page 2 are taken up with: "...Doctor Shebbeare's thoughts on Civil Liberty...his Sentiments on the Question, 'Whether the War with America be Justified by the Principles of the Constitution?' " (see for the beginning).
Page 2 has an item "from an officer at Staten Island" noting: "We arrived here safe & are very agreeably situated. The number we have is about 8000 men...some other transports of Fraser's have been taken by the rebels; and we are sorry to learn the men were sent through their towns as a show, amidst the insults of the populace." This is followed by another letter concerning Staten Island. And further in the issue are two more letters datelined from Staten Island, which include: "...New York is very strongly fortified...the Provincial army is not so numerous as we have been taught to believe..." with much more.
The back page has a lengthy letter from Sandy Hook with some fine content concerning the Revolutionary War (see photos), with mention of General Arnold & others, and includes: "...that General Howe defeated a large body of rebels who were going from Phila. to join General Washington...".
Eight pages, 8 1/2 by 11 1/4 inches, nice condition.