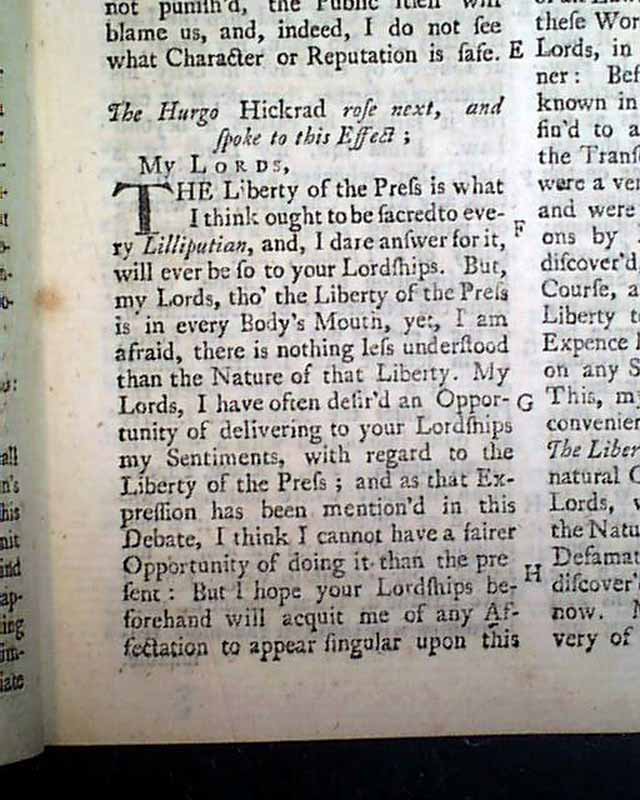 * Much on the Liberty of the Press
* George Whitefield, Methodism, Catholicism, and Judaism
* Surrender of Belgrade

This issue has multiple noteworthy articles, one of which includes nearly two pages regarding the Liberty of the Press written by Hurgo Hickrad (*likely Philip Yorke, the 1st Earl of Hardwicke).

Another article within is headed: "Continuation  of the dissertation begun in our Last Whether the Hebrews Borrow'd any Customs from the Heathens" which takes over 1 1/2 pages (see photos for portions). Yet another has "Manifesto of the Catholick Majesty..." concerning a payment to the South Sea Tea Company. A series of articles includes: "The Calculation of Mr. Whitefield's Hearers Justified", and two others related to Methodism.

Among the other *articles noted in the table of contents are: "Debate in the House of Lords, 1675, on Addressing the King to Dissolve the Parliament" and "Mal-Practices of the Navy Officers" and more.

* There is much reporting on events in Parliament under the guise of: "Proceedings, etc. in the Senate of Lilliput", as direct reporting on Parliamentary events was prohibited.