Home > Back to Search Results > Action on the Slavery Abolition Act of 1833...
Click image to enlarge 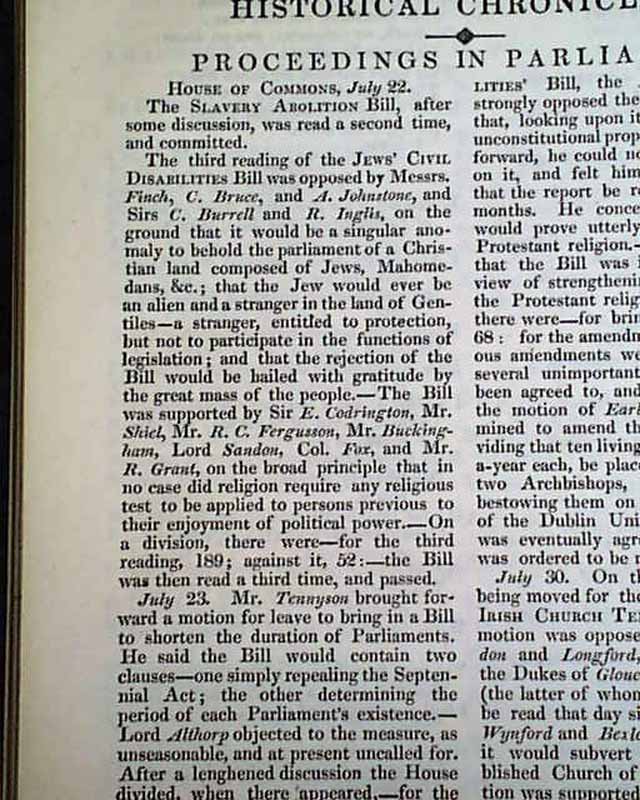 "Proceedings In Parliament" begins with: "The Slavery Abolition Bill, after some discussion, was read a second time, and committed. The third reading of the Jews' Civil Disabilities Bill was opposed by Messrs. Finch, C. Bruce..." with more on this (see). Another page has an item dated Aug. 7 reading: "The Slavery Abolition Bill was read a third time and passed. A clause, to the effect that apprenticed labourers should not be compelled to labour on Sunday, but have freedom for religious worship, was agreed to." Somewhat related is a report from the House of Lords: "The Colonial Slavery Abolition Bill was read third time, and passed..." (see).
The historic Slavery Abolition Act of 1833, referenced above, would receive the Royal Assent on Aug. 26. See the web for much more on the significance of this act which would abolish slavery throughout the United Kingdom.
Included are the two full page plates called for.
Complete in 96 pages, 5 1/4 by 8 1/2 inches, full title/contents page, nice condition.