Home > Back to Search Results > Financial crisis in the Confederacy...
Click image to enlarge 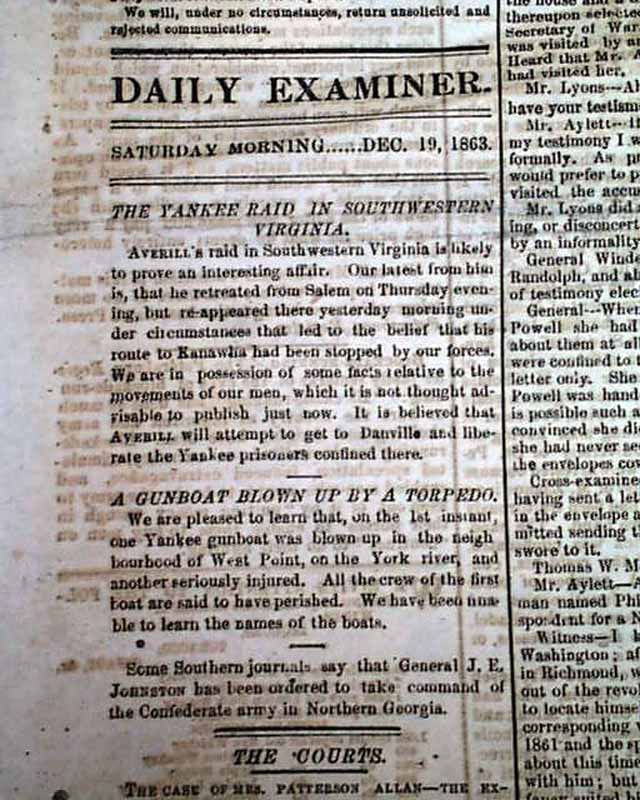 Financial crisis in the Confederacy...

A nice newspaper from the capital of the Confederate states, with the front page containing various advertisements as well as news reports, some of which are headed: "The Yankee Raid In Southwestern Virginia", "The Courts", "A Gunboat Blown Up by a Torpedo", "City Intelligence" and other smaller items.
The back page has the always interesting editorial, which begins: "The people of the Confederate States are bracing themselves to meet the financial crisis so long predicted & now so near at hand..." with more. Another topic in the editorial includes: "From the glowing pen of Major-General Halleck, which produced such magnificent, though unreal, bulletins of victories won...The year 1863 has in fact given more unbroken success to the arms of the enemy than any previous campaign..." with more.
Other items on the back page include; "A Monster gun--Trial of Sir William Armstrong's Six Hundred-Pounder", "The Virginia Legislature", "Horrible Brutality & Scenes in Poland", "and various reports from: "The Confederate Congress" and a few other items.
Complete as a single  sheet newspaper with a full banner masthead, and in nice condition.