Home > Back to Search Results > Death of General Putnam... On Franklin's will... Jews at Metz...
Click image to enlarge 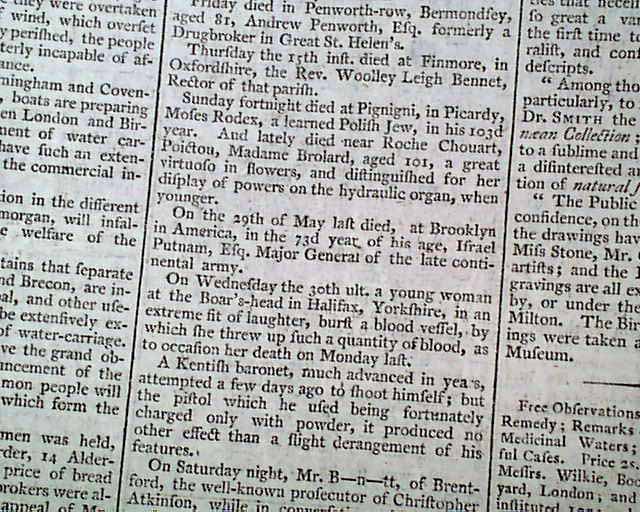 Death of General Putnam... On Franklin's will... Jews at Metz...

Pg. 2 has a brief item: "On the 29th of May last died, at Brooklyn in America, in the 73rd year of his age, Israel Putnam, Esq., Major General of the late continental army." Half of page  4 has news headed: "America" which includes a report from Boston: "The Select Men, having received from the executors of Dr. Franklin's will...The extracts are lengthy & contain many of those judicious & elegant maxims & observations for which the Doctor is so justly celebrated. They contain many legacies to the town..." with more.
Page 6 has a Judaica report noting: "...relative to the Jews resident at Metz. It appeared that that persecuted people had been since 1715 subject to an annual tax of 20,000 livres payable to the family of Brancas for the privilege of protection..." with more.
Eight pages, 8 1/2 by 11 3/4 inches, great condition.