Home > Back to Search Results > Treaty of Ghent ends the War of 1812...
Click image to enlarge 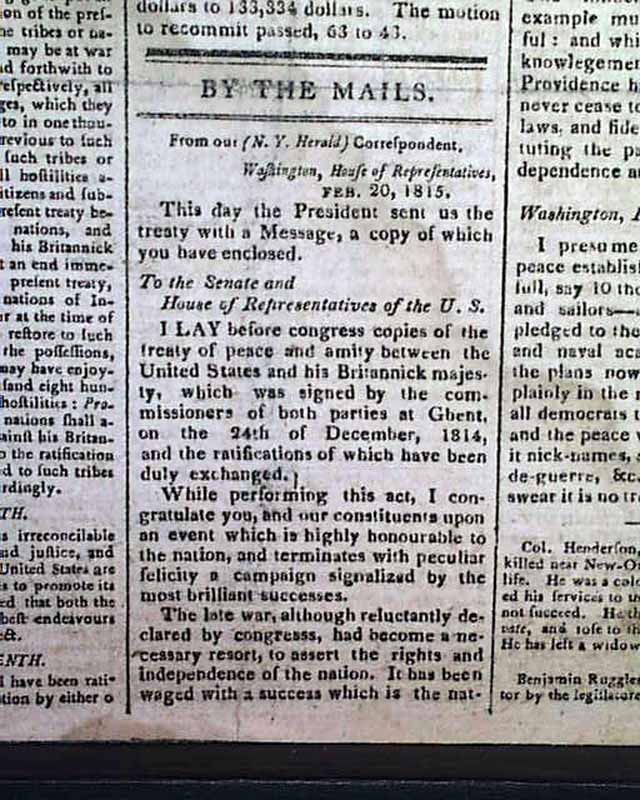 * Treaty of Ghent signed
* War of 1812 officially over

The front page has: "TREATY Of Peace And Amity, Between his Britannick Majesty and the United States of America.", the treaty which ended the War of 1812. The treaty contains a preface beginning: "His Brittanick Majesty and the United States of America, desirous of termination the war...between the countries, and of restoring, peace...have, for that purpose, appointed their respective plenipotentiaries...", plus details about the representatives appointed by the King and those by the President of the U.S., all of whom "...after a reciprocal communication of their respective full powers, have agree upon the following articles...".
Hereafter, and concluding on pg. 2, are the eleven articles of the treaty, signed in type: John Q. Adams, James A. Bayard, Henry Clay, Albert Gallatin, and several others. Page 2 also has the message from the President that he forwarded a copy of the treaty to Congress, signed in type: James Madison.
Under "Grand Celebration" is a report about the local celebration marking the return to peace, including the lyrics of a ode that was sung commemorating the return of peace, and the order of procession that began at the State House and passed through the town.
Four pages, some damp staining to a lower corner, a small piece missing in the lower left which affects about 3 words on pg. 2 only, otherwise in nice condition.