Home > Back to Search Results > Recognizing the independence of America...
Click image to enlarge 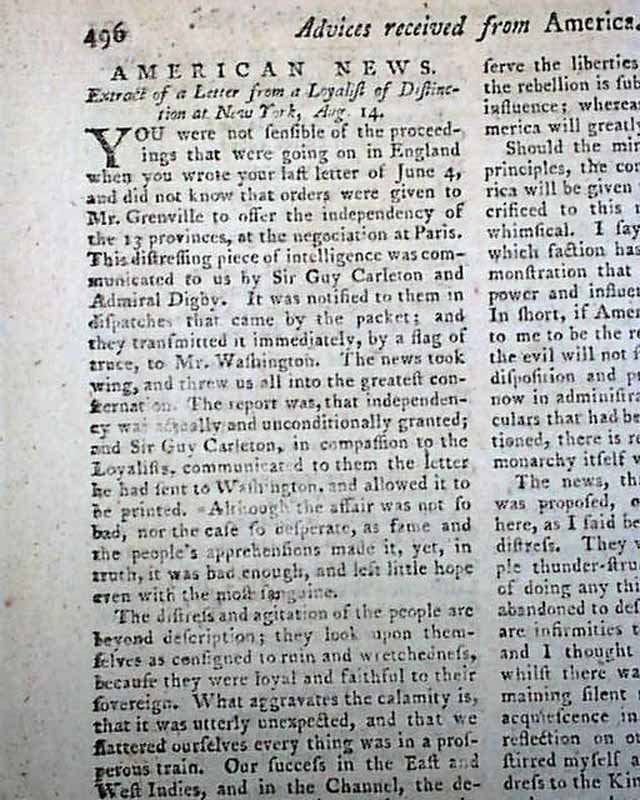 Recognizing the independence of America...

Near the beginning are 9 pages of "Summary of Proceedings in the Second Session of  the Present Parliament". Near the back is the "Historical Chronicle" which has the latest news reports of the day and includes under: "American News" an "Extract of a Letter from a Loyalist of Distinction at New York, Aug. 14" and which has: "You were not sensible of the proceedings...when you wrote ...and did not know that orders were given to Mr. Grenville to offer the independency of the 13 provinces at the negociation at Paris. This distressing piece of intelligence was communicated to us by Sir Guy Carleton...they transmitted it immediately by a flag of truce to Mr. Washington. The news took wing & threw us all into the greatest consternation. The report was that independency was actually and unconditionally granted...The distress & agitation of the people are beyond description..." and further on is: "The news that American independency was proposed overwhelmed the Loyalists here...with astonishment & distress..." with much more (see). On another page is a: "Resolution of Congress" which notes: "Resolved, That Congress approve the conduct of General Washington in refusing to enter into any discussion with General Carleton on the subject of the Treason Laws passed by the several States. Resolved, That the States of America, which compose the Union, being sovereign and independent, the laws respectively passed by them for their internal government...cannot be submitted to the discussion of any foreign powers, much less of an enemy."
All of this American content takes over 2 pages.
Includes the foldout plate called for.
Complete in 48 pages, never-trimmed margins, 5 1/2 by 8 3/4 inches, full title/contents page with an engraving of St. John's Gate, very nice, clean condition.