Home > Back to Search Results > A conversation between Ben Franklin and the French Minister...
Click image to enlarge 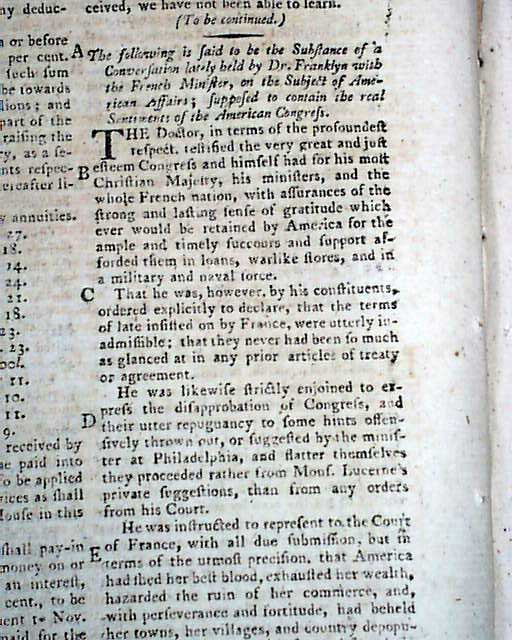 A conversation between Ben Franklin and the French Minister...

Most notable is the article which is prefaced with: "The following is said to be the Substance of a Conversation Lately Held by Dr. Franklyn [Franklin] with the French Minister on the Subject of American Affairs; supposed to Contain the Real Sentiments of the American Congress" which takes over a full column.
Near the back is the "Historical Chronicle" which has the latest news reports of the day. One item begins: "Among the calamities that have attended the American war, none are more to be lamented than the untimely deaths of many brave men, cut off, not in battle or in any honourable service, but by treachery or in the detestable act of plundering their enemies or fellow subjects..." with a bit more.
Includes the one foldout plate called for
Complete in 56 pages, 5 1/2 by 8 3/4 inches, never-trimmed margins, full title/contents page with an engraving of St. John's Gate, very nice condition.