Home > Back to Search Results > Anger over the Boston Port Bill...
Click image to enlarge 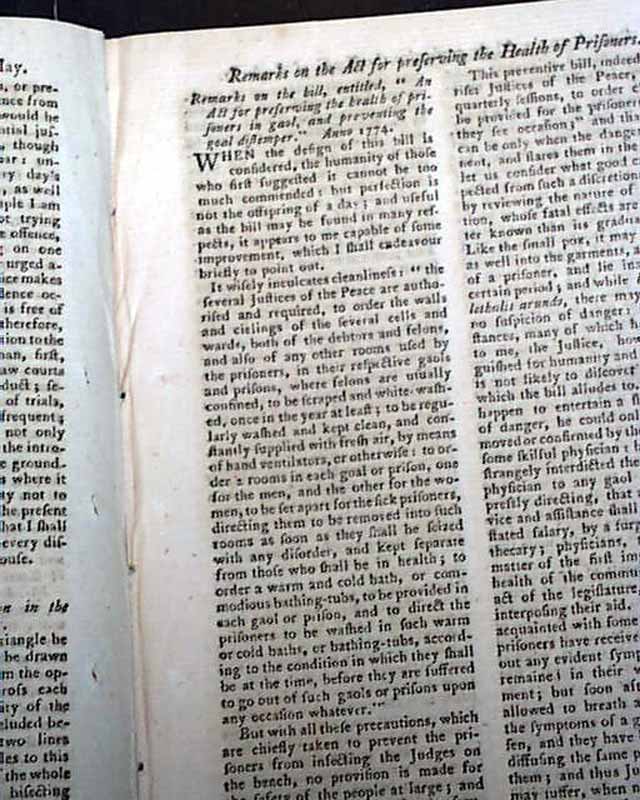 Anger over the Boston Port Bill...

Item # 642824
THE GENTLEMAN'S MAGAZINE, London, Aug., 1774  Near the back are over 3 pages under the heading: "Proceedings of the American Colonies" with a report from Annapolis beginning: "At a meeting of the inhabitants of this city, it was unanimously resolved that the late act of parliament for blocking up the harbour of Boston is an attack upon the liberties of America & that Boston is now suffering in the common cause..." with more.
A report from New York notes: "...resolved, that the statute, commonly called the Boston Port Act, is oppressive to the inhabitants of that town, unconstitutional in its principles & dangerous to the liberties of America..." with more, & one of several Philadelphia reports includes: "...agreed to suspend all business on the first of June thereby to express our sympathy for our brethren at Boston...and to give an opportunity of reflecting on the precarious situation of American rights." There are also several reports with datelines from Charleston, Williamsburg, Portsmouth, Boston & Salem. One of the Boston reports reiterates the covenant drawn up by the Committee of Correspondence: "...in order to be signed by the inhabitants of the several cities & towns who shall adopt the same, purporting, 'That we, the inhabitants of the town of ___, conscious of no alternative between the horrors of slavery or the carnage & desolation of a civil war, but a suspension of all commercial intercourse with Great Britain...". A bit further on is an item noting that Governor Gage issued a proclamation cautioning: "...all persons, whatsoever, within his jurisdiction, against signing the aforesaid solemn league & covenant...".
Also in this issue are: "Remarks on the Act for Preserving the Health of Prisoners" "A tour in the Midland Counties of England" and much more. Included as well is the only plate called for, being a nice foldout map of a canal from Leeds to Selby which measures 8 1/4 by 14 inches & has various foxing.
Complete in 56 pages, 5 by 8 inches, full title/contents page with an engraving of St. John's Gate, nice condition.