Home > Back to Search Results > Follow-up to the historic Somersett slave case... Bougainville in Tahiti...
Click image to enlarge 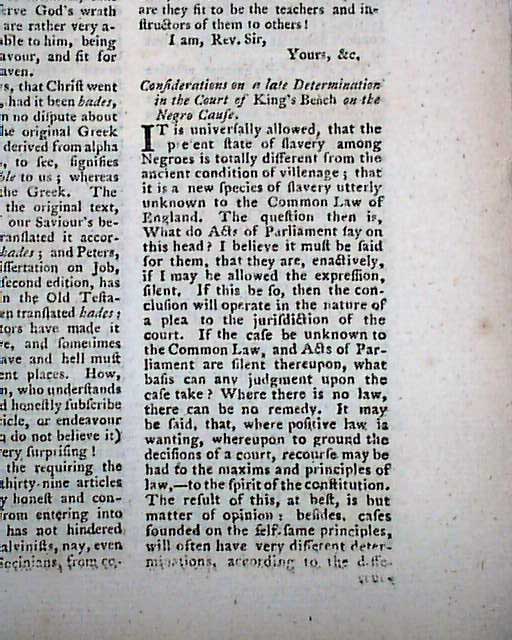 Follow-up to the historic Somersett slave case... Bougainville in Tahiti...

Item # 642817 THE GENTLEMAN'S MAGAZINE, London, July, 1772  The most significant articles in this issue would be two follow-up commentaries concerning the landmark James Somersett slave case.
Somerset was a slave purchased in Virginia then taken to England, escaped & eventually recaptured. This case concerned whether he was free or remained a slave and ultimately determined that slavery was unsupported in England.
The articles are titled: "Considerations on a Late Determination in the Court of King's Bench on the Negro Cause" which is a direct reference to the Somersett case which was just decided on June 22 and takes over a full page, and: "An Argument Against Property in Slaves" which relates to the Somersett case as well. Further on is: "A Plan for the Abolition of Slavery in the West Indies".
Also within this issue is "Bougainville's Delineation of the Periagua's of Taiti [Tahiti], and the Adjacent Islands". Bougainville was a French explorer who circumnavigated the world, and who explored Tahiti.
All 3 plates called for are present.
Complete in 48 pages, full title/contents page featuring an engraving of St. John's Gate, 5 1/2 by 8 3/4 inches with wide, untrimmed margins, very nice condition.