Home > Back to Search Results > The Jacobite Rebellion... Falkirk...
Click image to enlarge 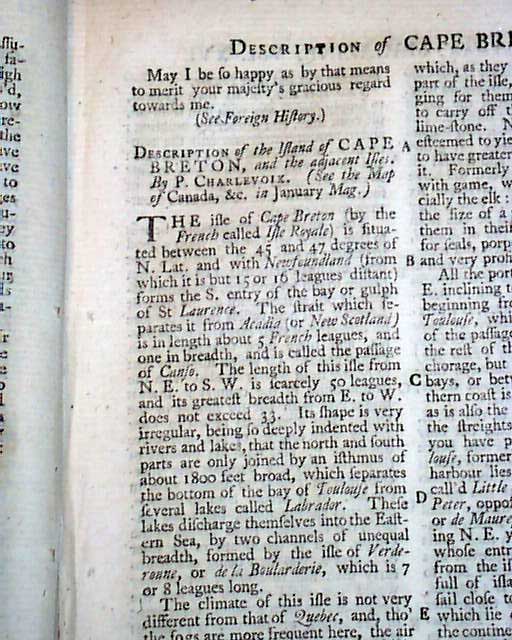 Item # 642727
THE GENTLEMAN'S MAGAZINE, London, March, 1746  Six pages are taken up with: "Description of Cape Breton" and "Importance of Cape Breton". And over four pages are taken up with: "Description of QUEBEC, Character of it Inhabitants, and the manner of Living in that French Colony".
Over four pages have much detail on the Jacobite Rebellion with: "Motions of the Rebels" being reports from the London Gazette & elsewhere. The back page has news from "Scotland" concerning the Jacobite Rebellion, and noting: "...order...publish'd by his royal highness commanding all those who have been pressed into the rebellion to quit it immediately & return to their allegiance...". Mention of Falkirk here as well.
Three pages are taken up with: "Account of a Voyage to Lapland". Among other articles are: "Memoir of the late King of Sardinia" "Case of a Lady with a Cruel Husband" "...for suppressing...the Practice of Smuggling" "The Farmer's Third Letter to the Irish Protestants" "Enthusiasm a true Source of Valour, and often the Cause of Victory." "Strange Generation of Insects" and more.
Near the back is the "Historical Chronicle" which includes: "...letter from New York...about 5000 are in motion & seem to have a design upon Boston in New-England...". There is also an item headed: "The Duke de Bouillon to the Young Pretender" being "Bonnie Prince Charlie" who continued to claim the Stuart right to the British throne.
No maps or plates are called for.
Complete in 56 pages, full title/contents page featuring an engraving of St. John's Gate, 5 3/4 by 8 3/4 inches with wide, untrimmed margins, very nice condition.