Home > Back to Search Results > Pay set for the President and Vice President...
Click image to enlarge 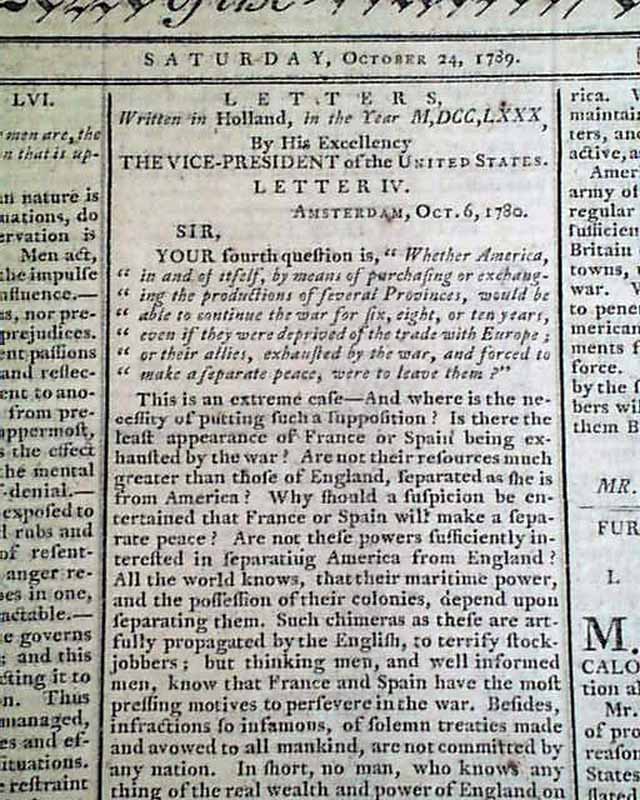 Pages 2 & 3 contain an address: "To George Washington, President of the United States of America" from the Governor of Connecticut, upon Washington's visit to the state, to which he responded with an address signed by him in italic type: G. Washington (see). This is followed by an address from the Congregational Ministers of the city of New Haven to the President, to which he again responded with a letter signed in italic type: G. Washington. Also reports on the President's planned arrival at Boston.
But perhaps of greater significance is the back page Act of Congress titled: "An ACT for Allowing a Compensation to the President and Vice President of the United States" which is signed in type by both John Adams and George Washington, & which notes in part: "...shall be allowed to the President of the United States, at the rate of twenty-five thousand dollars with the use of the furniture & other effects...and to the Vice President, at the rate of five thousand dollars per annum..." with more (see). Plus half of the back page is taken up with the recent "Proceeding Of Congress" which includes the newly formed rules for the Senate.
Four pages, minimal margin wear, minor mend & loss to the lower blank margin of the back leaf, nice condition.