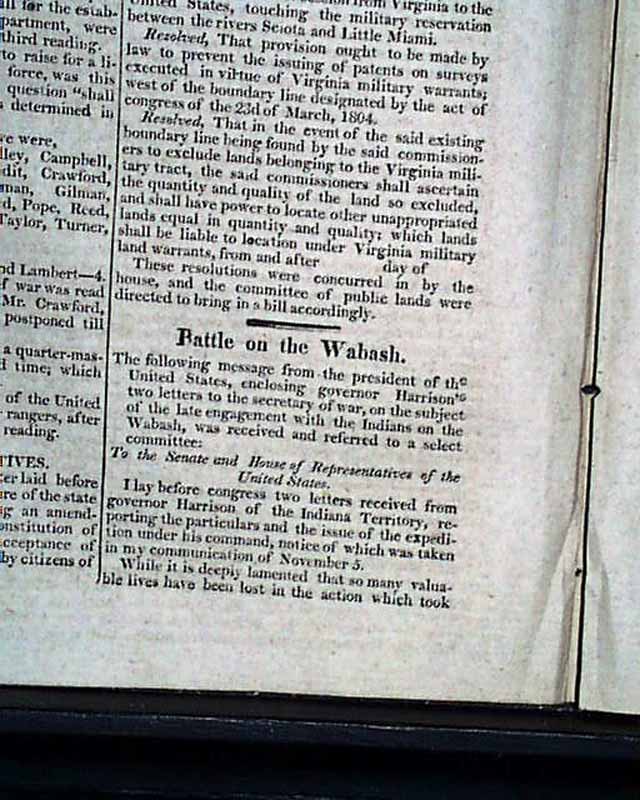 
NILES' WEEKLY REGISTER, Baltimore, Maryland, Dec. 28, 1811  Perhaps the prime content in this issue is a report on the Battle of Tippecanoe, headed: "Battle On The Wabash" and prefaced with: "...message from the President of the United States, enclosing governor Harrison's two letters...on the late engagement with the Indians..." with the complete text taking nearly 4 pgs. (see photos for portions), including the note signed in type: James Madison, and the detailed battle report signed: William Henry Harrison. There is also another report datelined "Vincennes, 4th Dec. 1811" on the battle, signed: William Henry Harrison.
Included also are the census reports for Georgia, North Carolina and South Carolina, including a column for "Slaves".
Complete in 16 pages, measures 6 1/4 by 9 1/2 inches and in very nice condition.
This small size newspaper began in 1811 and was a prime source for national political news of the first half of the 19th century. As noted in Wikipedia: "Niles edited and published the Weekly Register until 1836, making it into one of the most widely-circulated magazines in the United States and himself into one of the most influential journalists of his day. Devoted primarily to politics, Niles' Weekly Register is considered an important source for the history of the period."