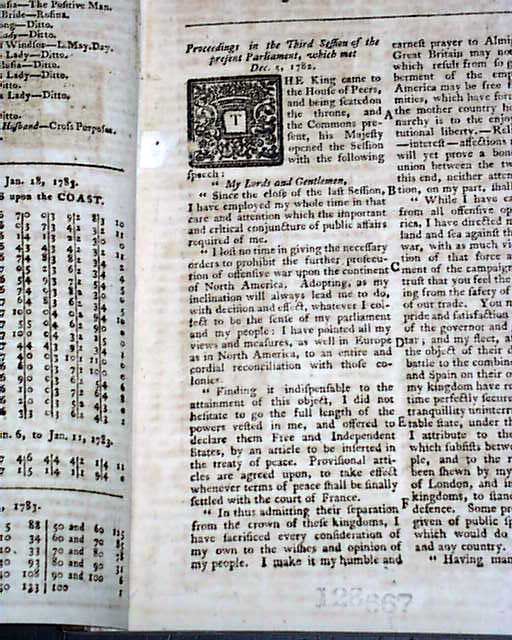 Item # 642332 THE GENTLEMAN'S MAGAZINE, London, January, 1783 (at a reduced price)  An exceedingly historic issue, particularly found in this British publication, in which the King of England formally recognizes the independence of the American colonies.
The top of the first page is headed: "Proceedings in the Third Session of the Present Parliament, which met Dec. 5, 1782" followed by a lengthy speech delivered by the King of England before the House Of Lords, prefaced with: "The King came to the House of Peers, and being seated on the throne, and the Commons present, his Majesty opened the Session with the following speech:."
Hereafter is the text of the King's speech proclaiming the independence of America, reading in part: "Since the close of the last Sessions...I lost no time in giving the necessary orders to prohibit the further prosecution of offensive war upon the continent of North America....I have pointed all my views and measures, as well in Europe as in North America, to an entire and cordial reconciliation with those Colonies. Finding it indispensable to the attainment of this object, I did not hesitate to go the full length of the powers vested in me, and offered to declare them Free and independent States, by an article to be inserted in the treaty of peace....In thus admitting their separation from the crown of these kingdoms....I make it my humble and earnest prayer to Almighty God, that Great Britain may not feel the evils which might result for so great a dismemberment of the empire; and that America may be free from those calamities, which have formerly proved in the mother Country how essential monarchy is to the enjoyment of constitutional liberty..." & more.
The speech takes all of the front page & concludes on the second page. Great to have this speech at the very front of this well known British magazine.
The balance of issue is taken up with: "Summary of Proceedings in the Third Session of the Present Parliament" plus many other articles as well, but they pale in comparison to the significance of the King's speech noted above.
Near the back is some: "American Intelligence" which includes a letter: "From Gen. Washington to Sir Guy Carleton" which begins: "I cannot help remarking that your excellency has several times lately taken occasion to mention that all hostilities stand suspended on your part: I must confess that to me this expression wants explanation..." with more. This is followed by the response: "From Sir Guy Carleton to Gen. Washington" (see).
Both of the plates called for are present, one being a foldout of "fire ships used at the siege of Antwerp...".
Complete in 96 pages, full title/contents page featuring an engraving of St. John's Gate, 5 by 8 1/4 inches, perforated library stamp at the top of the title page, good condition.