Home > Back to Search Results > Battle of Monmouth and much more...
Click image to enlarge 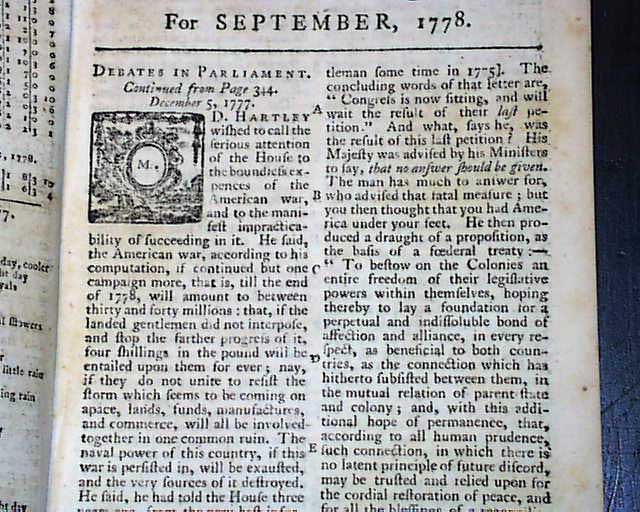 Battle of Monmouth and much more...

Item # 642287
GENTLEMAN'S MAGAZINE, London, September, 1778  This is a very historic issue with terrific coverage on the Battle of Monmouth as well as a wealth of other fine reports on the Revolutionary War.
The issue beings with: "Debates In Parliament" taking 5 pages and containing much discussion on the war with America, including in part: "...call the serious attention of the House to the boundless expences of the American war, & to the manifest impracticability of succeeding in it...the naval power of this country, if this war is persisted in, will be exhausted...that America was not to be reduced by conquest..." with much more (see for portions).
The prime feature of this issue would be the excellent "...General Washington's Account of the late Action in the Jerseys, between Gen. Clinton's and the American Army", following which is a very nice, detailed account of the Battle of Monmouth which takes about 2 1/2 pages and is signed in type: G. Washington. As for his disgust with the actions of General Lee in retreating, he notes: "...The peculiar situation of Gen. Lee at this time requires that I should say nothing of his conduct. He is now in arrest. The charges against him, with such sentence as the Court martial may decree in his case..." with more. This report is followed by the "Return of the killed, wounded, and missing..." in the Battle of Monmouth.
Also a lengthy address from Congress to all Americans concerning the war, and a nice letter from General Sullivan to General Pigot. There is also a lengthy: "Proclamation" from England attempting to quell the desires of the colonists with a terrific & lengthy response from Congress firmly underlining their determinations towards independency, including: "...every effort was vain; for even whilst we were prostrated at the foot of the throne, that fatal blow was struck which hath separated us for ever..." with much, much more and taking over 2 1/2 pages.
Yet another report from Sunbury, Pennsylvania, notes: "...we have the melancholy account of a large body of Indians, Tories, and some British troops, having made an incursion through that country..." with more, which is a report on the Wyoming Massacre in Northeast Pennsylvania. A very historic issue with a great wealth of war-related content, too much to show here.
Includes the full page plate called for, being: "A curious non-descript reptile...".
Complete in 48 pages, 5 1/4 by 8 1/4 inches, full title/contents page featuring an engraving of St. John's Gate, great condition.