Home > Back to Search Results > Battle of Monmouth... Reflecting on Burgoyne's defeat...
Click image to enlarge 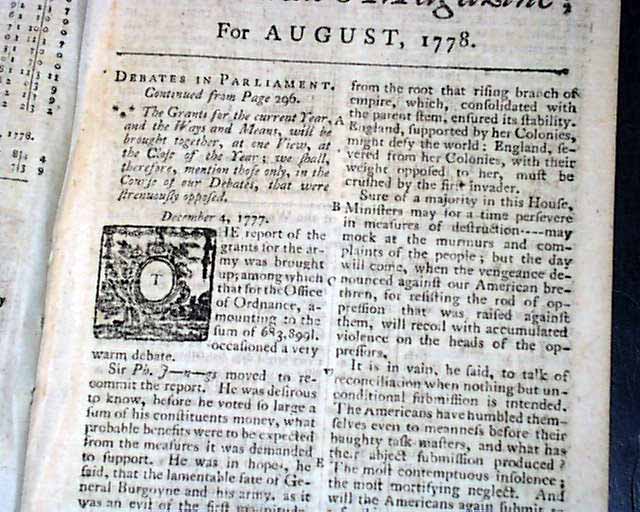 The very first article is: "Debates In Parliament" which includes much talk on the Revolutionary War, and includes in part: "...was in hope...that the lamentable fate of General Burgoyne & his army, as it was an evil of the first magnitude, might...have been productive of some good..." and a bit further on: "...The Americans have humbled themselves even to meanness before their haughty task masters, and what has their abject submission produced? The most contemptuous insolence; the most mortifying neglect. And will the American again submit to a similar treatment from their declared, their inveterate enemies? They never will..." "...Their independence was carried in Congress but by a majority of two voices..." "...it was fairly owned that the reduction of America is impracticable...if it were  subdued, it would not be worth the charge..." with more taking close to 5 pages.
Another page discusses the departure of General Howe, in a letter from an officer in Philadelphia, taking 4 pages. Also: "...Account of the Reception of  the Commissioners by the Congress in America..." concerning attempts to find a peace with England. This is followed by a letter to the President of Congress, and several other letters concerning the war, including one signed in type by: G. Washington. There is also: "Particulars of the Life & Character of General Washington" (see for beginning).
A brief item notes: "A commission passed the Great Seal appointing Sir Henry Clinton Commander in Chief of the forces in America from Nova Scotia to West Florida." A nice & lengthy letter signed: H. Clinton, begins: "...I evacuated Philadelphia on the 18th of June..." then continues with nice detail of the historic Battle of Monmouth, including the list of killed, wounded & missing. Other war content as well.
Includes the full page plate which features a print of King Henry VIII (see).
Complete in 56 pages, 5 1/4 by 8 1/4 inches, full title/contents page with an engraving of St. John's Gate, great condition.