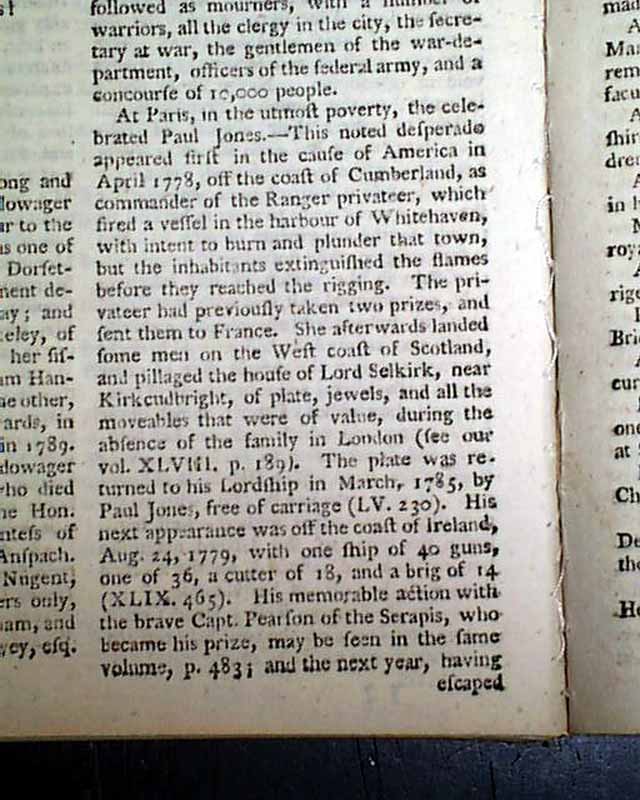 By far, the most interesting item in this issue is the obituary for John Paul  Jones. As can be seen in the report he does not get good press in this British publication (not surprisingly), with portions including: "At Paris, in the utmost poverty, the celebrated Paul Jones. This noted desperado appeared first in the cause of America in April 1778...intent to burn & plunder that town [Whitehaven]...His memorable action with the brave Capt. Pearson of the Serapis, who became his prize...In December, 1783, he arrived in London from Paris..." with more, ending with: "...We doubt not this pirate (for he deserves no better name) will find some fuller biographers." (see).
Among the other articles in this issue are: "Padoucas, Or White Indians" in America, taking over two pages (see for the beginning); "An Easy Cure for the Scurvy" "Thoughts on the Slave Trade" and more. Near the back is news from "America" regarding a proclamation inviting settlers to land in Canada if they sign an oath of loyalty (see).
Complete with all three full page plates called for.
Complete in 96 pages measuring 5 by 8 1/4 inches with full title/contents page featuring an engraving of St. John's Gate. Slightly irregular at the blank spine margin, a library stamp at the bottom margin of 4 pages plus the bottom of two of the plates, very nice condition.
A very nice magazine from the late 18th century with a wide range of varied content including news of the day, political reports, literary items, and other unusual tidbits. This was the first periodical to use the word "magazine" in its title, having begun in 1731 and lasting until 1907.