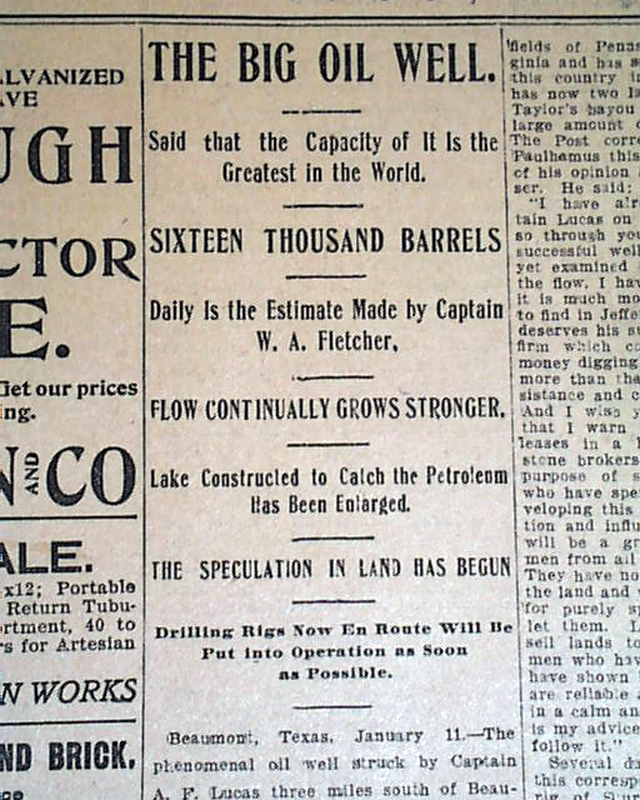 * Discovery of oil in Beaumont, Texas
* Beginning of the Great Spindletop oil well

The discovery of oil in Beaumont, Texas, was the beginning of the oil industry in Texas. When the well struck on January 10, 1901 it would gusher uncontrollably for 8 days before being capped. This newspaper reports on the beginning days of this "discovery" with front page one column headlines reading:

"THE BIG OIL WELL"
"Said that the Capacity of It Is the Greatest in the World"
"Sixteen Thousand Barrels"
"Daily Is the Estimate Made by Captain W. A. Fletcher"
"Flow Continually Grows Stronger"
"Lake Constructed to Catch the Petroleum Has Been Enlarged"
"The Speculation In Land Has Begun"
"Drilling Rigs Now En Route Will Be Put Into Operation as Soon as Possible"

See the photos for the full report which takes over 1 1/2 columns in the middle of the front page. Keep in mind that Houston is the closest major city to the site of the Spindletop discovery, just 87 miles away. As such this would likely be the very best newspaper to be had with this significant report. And great to have the report on the front page.

As noted by Wikipedia,the January 10 discovery at Spindletop marked the birth date of the modern petroleum industry. At 100,000 barrels of oil a day, the gusher tripled U.S. oil production overnight.
Some of the companies chartered to exploit the wealth of Spindletop, such as Gulf Oil and Texaco, are part of today's Chevron Corporation.

Here is an account of the discovery as it was happening before being capped over a week later:
"January 1, 1901, we were back on the job. In the following seven days we made 140 feet of hold, making a total of 1,020 feet. There we seemed to hit a crevice. In letting pipe down in one place, it would go at least six inches farther than it would by giving the pipe a quarter turn. In rotating, our pipe would hang up and jerk the rotary chain to pieces. We kept grinding away without making any headway. ". . . We put the new bit (fishtail) on, and had about 700 feet of the drill pipe back in the hole when the rotary mud began flow up through the rotary table. It came so fast and with such force that Curt, who was up on the double boards, was drenched with mud and water and had a hard time getting out of danger. "Soon the 4-inch drill pipe started up through the derrick, knocking off the crown block and shooting through the top of the derrick and breaking off in lengths of several joints at a time as it shot skyward. After the mud, water, and pipe were blown out, gas followed, but only for a short time. Then the well was very quiet. We ventured back, after our wild scramble for safety, to find things in a terrible mess. There were at least six inches of mud on the derrick floor, and our equipment had suffered some damage. Naturally, we were all disgusted. We started shoveling the mud away-when, without warning, a lot of heavy mud shot out of the well with the report of a cannon. It was followed for a short time with gas, then oil showed up on head flows. In a very short time oil was going up through the top of the derricks, and rocks were being shot hundreds of feet into the air. Within a very few minutes, the oil was holding a steady flow at more than twice the height of the derrick. As soon as I pulled myself together, Peck Byrd was again started on the run for Captain Lucas. It was not long until we saw Captain Lucas coming over the small hill with his horse at full run. About this time he decided his horse was too slow, so he jumped from the buggy, picked himself up, and ran up to me shouting: 'Al! Al What is it?' When I told him 'oil', he exclaimed: 'Thank God,' and grabbed me and hugged me good and hard." At that moment a new epoch was born in the oil industry, and the name of Captain Anthony Francis Lucas was immortalized! While the tremendous gas pressure and volume of oil were running wild, and the well was blowing 200-odd feet into the air and pouring an estimated 75,000 to 100,000 barrels of oil onto the ground, the country as a whole became electrified. Fifty thousand people descended upon Beaumont to see the wonder, the shooting oil of Spindletop, four miles away. The Lucas well was heard 'round the world'. The well went wild, and for full ten days shot oil into the air, making a lake of about 100 acres. This discovery of oil led to the development of a big oil field, which later became known as Spindletop. It has produced over fifty million barrels of oil, and is still producing."

This is the complete 10 page newspaper. Lightly browned with some little edge tears and is somewhat fragile as would be expected of a newspaper of this vintage.A bit irregular at the spine with some minor loss here cauing no loss of text. Should be handled with care.

A great newspaper on the birth of the modern oil industry, and terrific to have in a Houston newspaper. 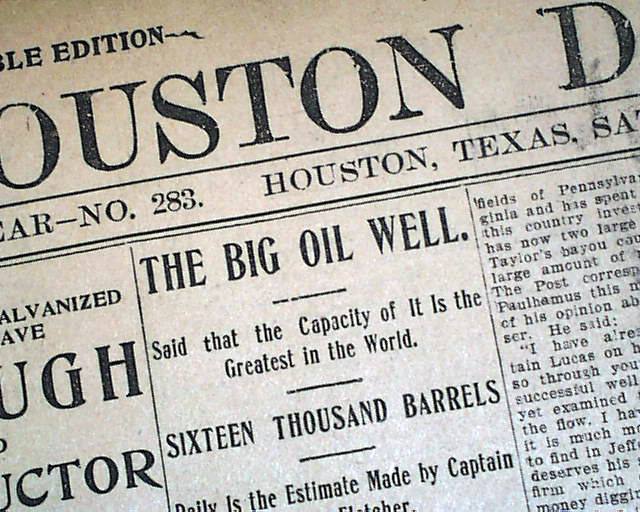 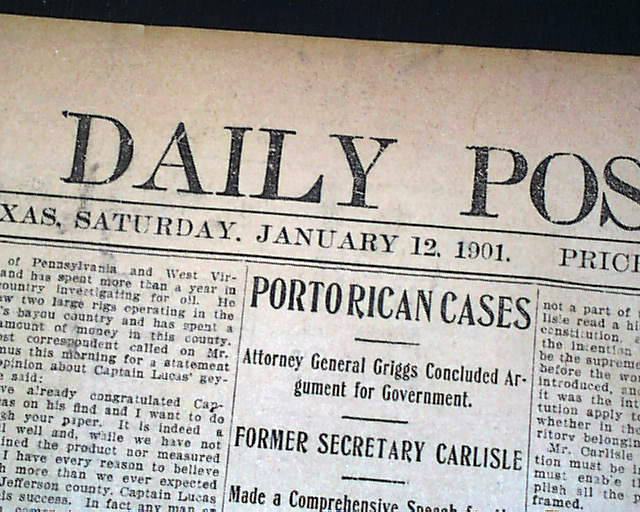 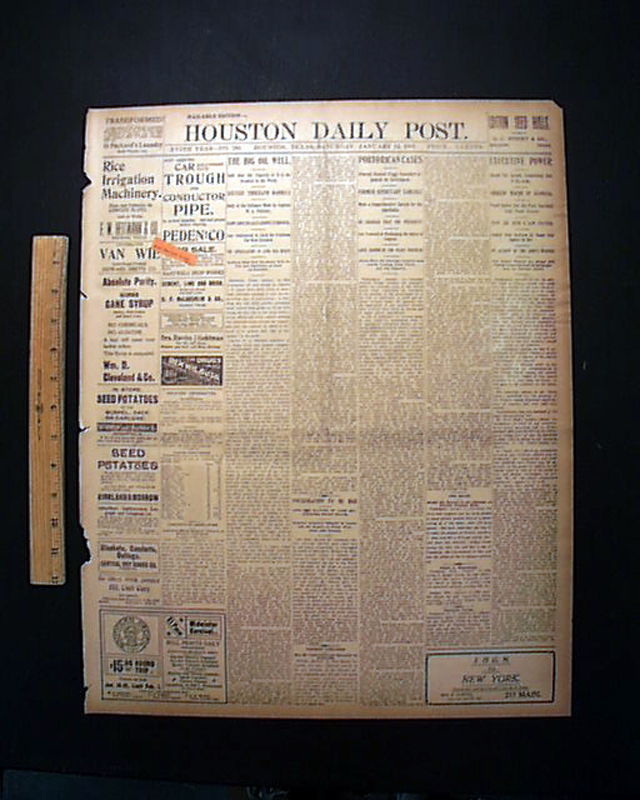 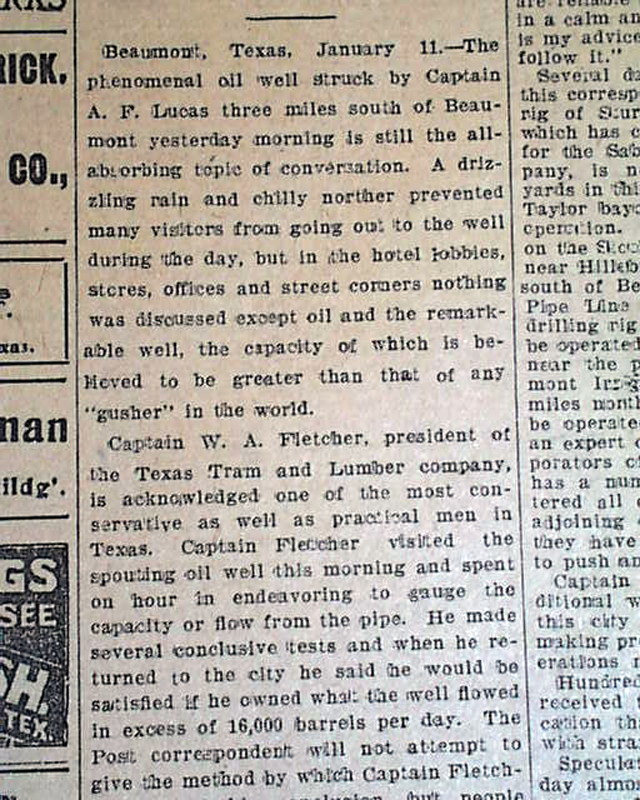 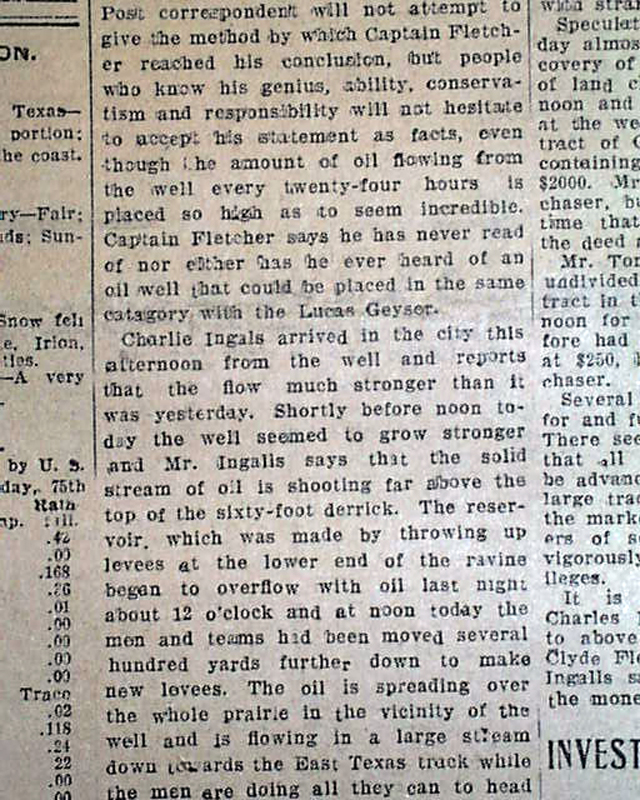 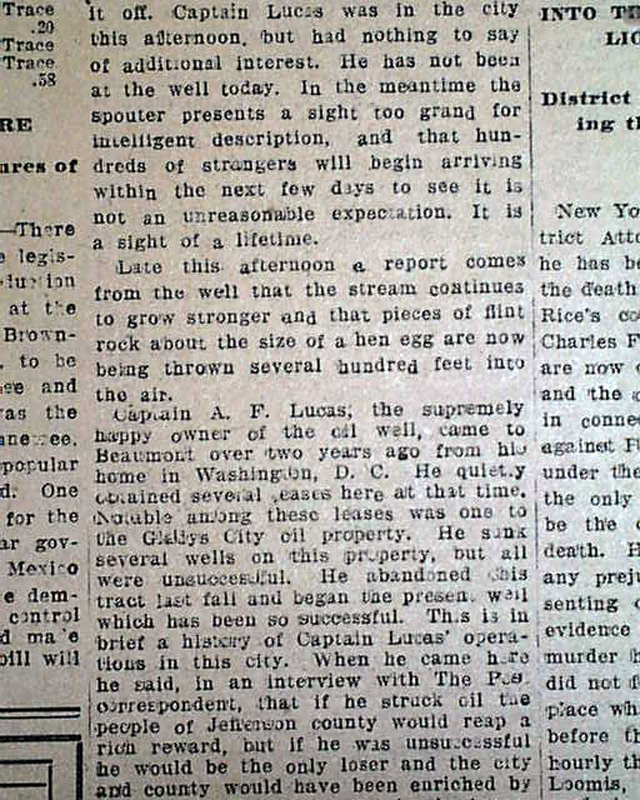 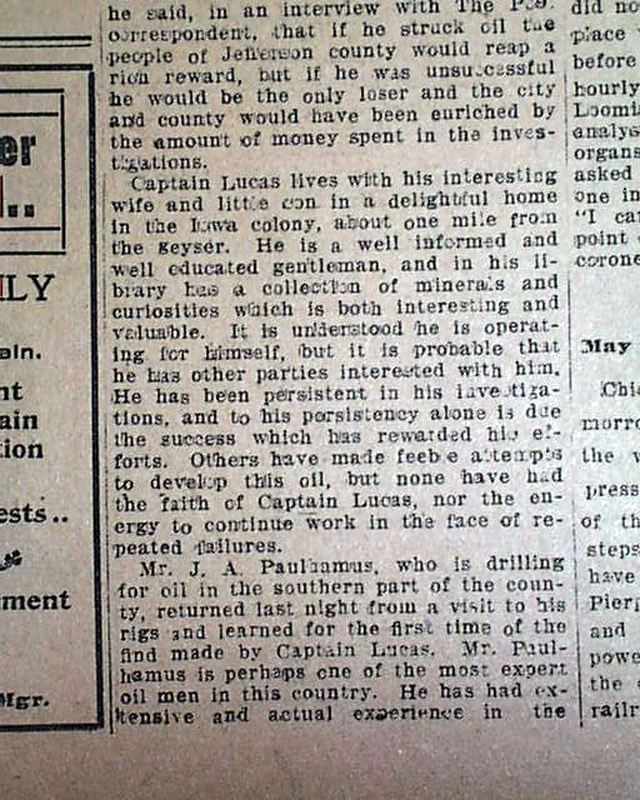 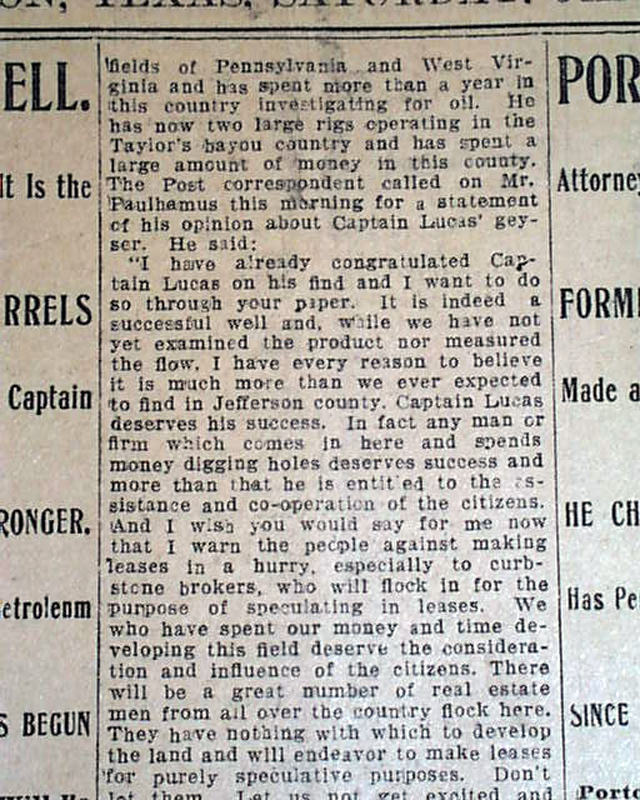 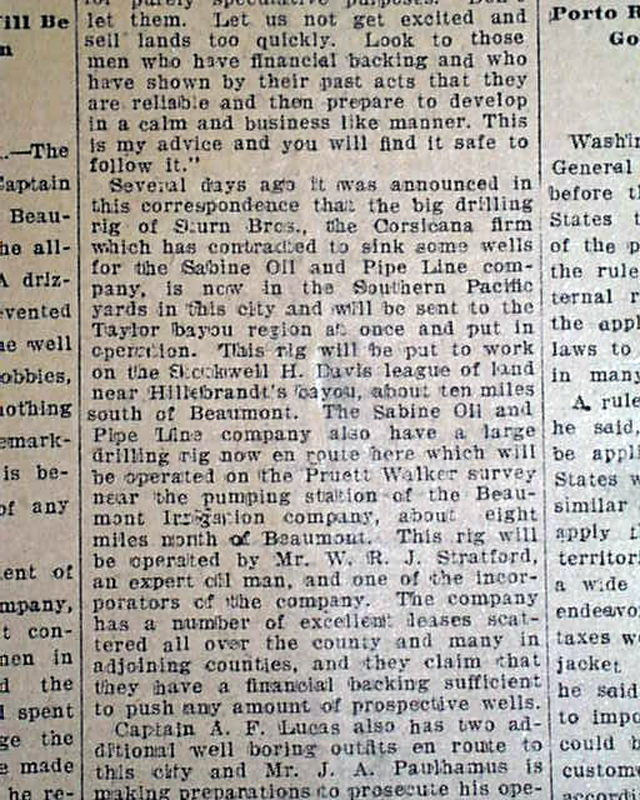 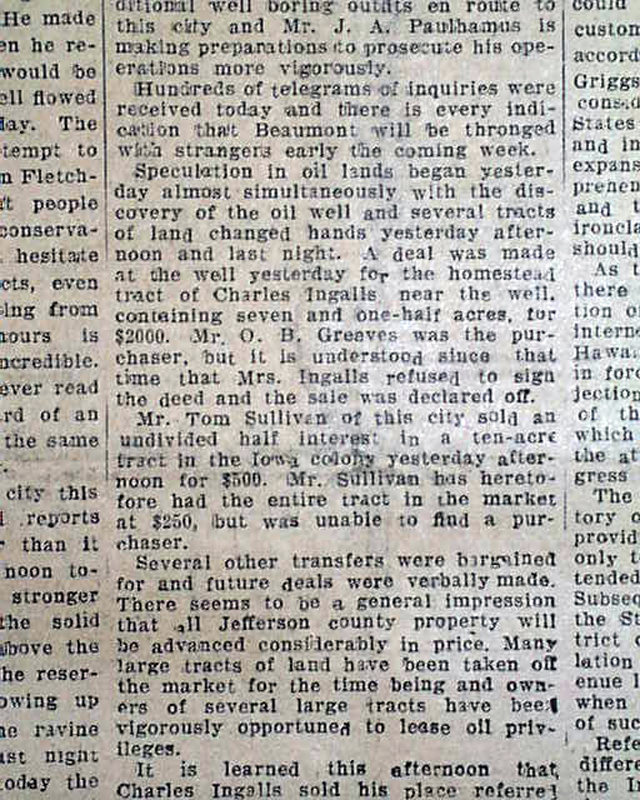 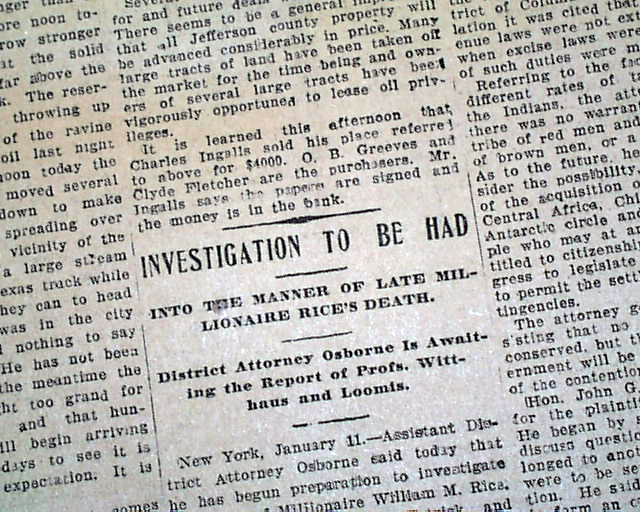