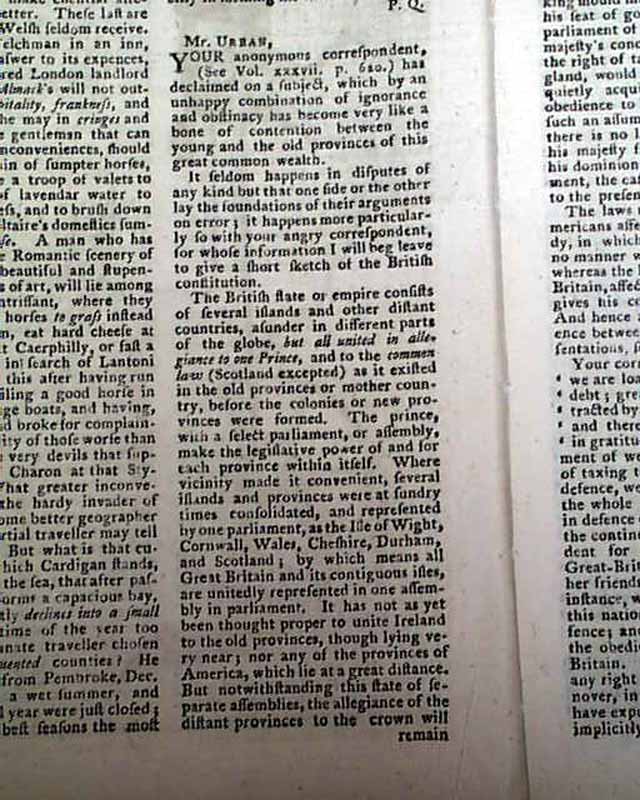 Inside has a letter which takes about a full page & is signed: A.B., which was written by Ben Franklin with a reported title of "Subjects of Subjects" (see image), and a few pages letter is another letter written by Franklin signed F.S. which also relates to America, this article taking over 2 1/2 pages. Among other resources, the comprehensive Franklin Bibliography written by Paul Leicester Ford attributes both to Franklin.
In the "Historical Chronicle" near the back is an item: "A pamphlet has lately been published at Paris in favour of the Jews, in which the author has shewn the eminent advantages which every nation reaps in its commerce from the encouragement & protection of that people. It is written with a view to obtain a religious toleration for that people; but it is doubted whether the enthusiasm of the country will suffer such arguments to have any weight." There is also an item from Virginia, and another with some content concerning New Orleans (see).
Both plates called for are present.
Complete in 48 pages, 5 1/2 by 8 3/4 inches with wide untrimmed margins, full title/contents page featuring an engraving of St. John's Gate, great condition.