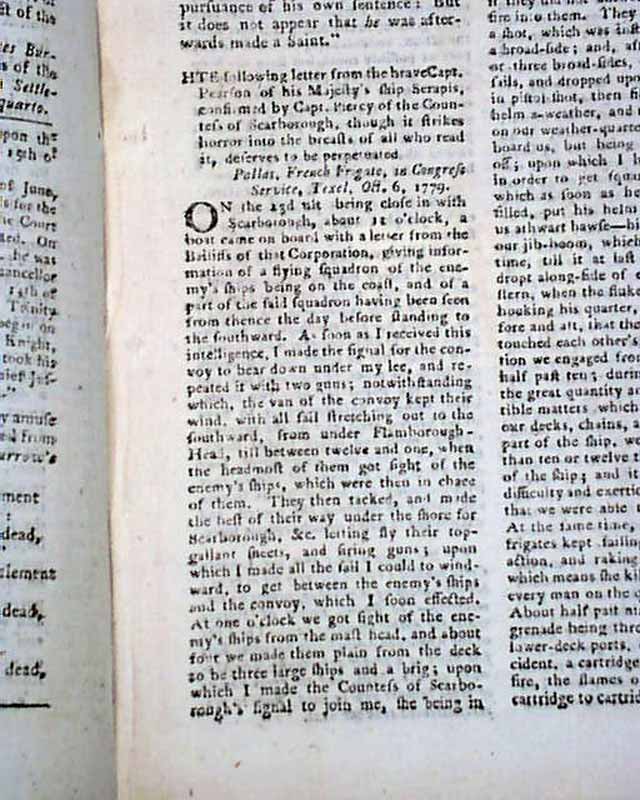 Item # 641353
GENTLEMAN'S MAGAZINE, London, October, 1779  Inside has a very historical report headed in part: "...following letter from the brave Capt. Pearson of his Majesty's ship Serapis..." which contains an excellent account of the most famous naval battle of the Revolutionary War. The account about the engagement, which takes nearly two pages, is quite graphic stating in part: "...we were on fire not less than ten or twelve times in different parts of the ship; and it was with greatest difficulty and exertion imaginable that we were able to get it extinguished. At the same time the largest of the...frigates kept sailing round us the whole action, and raking us fore and aft by which means she killed or wounded almost every man on the quarter and main decks..."  Later, when the situation appeared "impracticable" Pearson states that he and his first Lieutenant were escorted into the ship alongside the Serapis and "...found her to be an American ship of war, called the Bon Homme Richard, of 40 guns and 375 men, commanded by Capt. Paul Jones...I am extremely sorry for this misfortune that has happened, that of losing his Majesty's ship I had the honour to command...that every exertion has been used to defend her" with much more. The detailed report is signed in type by the captain of the Serapis: R. Pearson, following which is: "The killed were 49; wounded 68."
Nice to have in this title since this battle was fought off the east coast of England.
Further to the back is: "Letters to a Nobleman on the Conduct of the War in the Middle Colonies" which has much good content on the war, one bit noting: "...That the revolted colonies are naturally so strong as to be impracticable by war; that their inhabitants are almost universally disaffected to the British government; & that the force sent over to suppress the rebellion has been by no means equal to the object..." with much more. The "Historical Chronicle" has two page with American reports including much detail of a battle in South Carolina (see).
Included are both plates called for, one being a foldout, and another including a print of a shark (see).
Complete in 48 pages with wide untrimmed margins, full title/contents page with an engraving of St. John's Gate, 5 1/2 by 8 3/4 inches with wide untrimmed margins, great condition.