Home > Back to Search Results > Map of Canada & other portions of North America...
Click image to enlarge 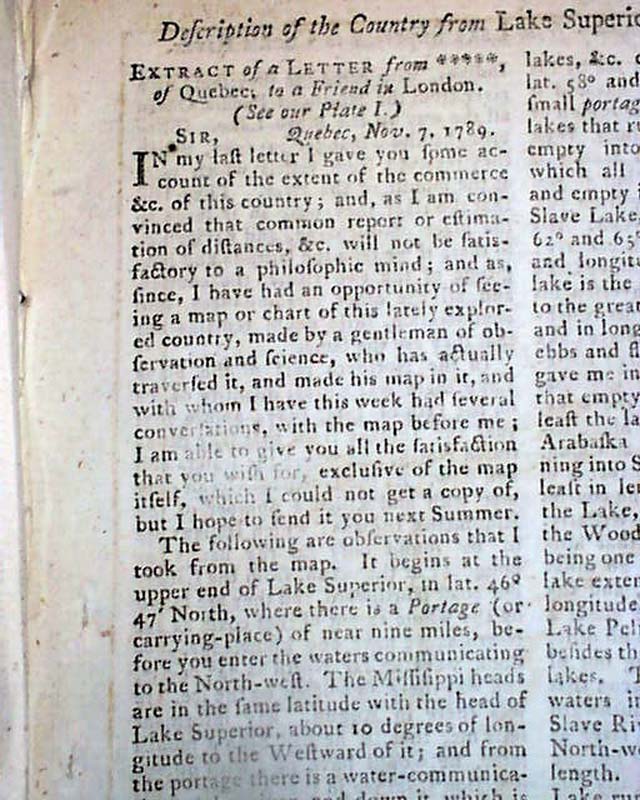 Map of Canada & other portions of North America...

Item # 640623 GENTLEMAN'S MAGAZINE, London, March, 1790  Certainly the prime feature of this issue is the nice, fold-out map: "A Map showing the communication of the Lakes and the Rivers between Lake Superior and Slave Lake in North America." The map shows the extreme western parts of Lake Superior and "Hudson's Bay", "Lake Winiping (now Lake Winnipeg in Manitoba) and other landmarks across what is now Saskatchewan, Alberta and British Columbia, to "Queen Charlotte's Island". Northern and northwestern points shown include Slave Lake in what is now the Northwest Territories, "Pr. William Sound" and Cook's River (both in Alaska).
The map is accompanied by a lengthy extract of a letter about the region: "Description of the Country from Lake Superior to Cooks River" which takes 2 1/2 pgs. Map measures 8 3/4 by 10 inches and is in excellent condition, It is dated at the upper right.
This issue also includes the other two full page plates called for.
Other articles within include: "Observations on the Action of Gravity" taking 3 pages; and a short bit concerning a letter by "Dr. Franklin" concerning the protection of Capt. Cook. Also near the back are: "Accurate Statement of the Late Revolution in France" and news headed "America" beginning: "...the New Government is said to have given new life to the trade, manufactures & agriculture of that country..." with more.
Complete in 96 pages, 5 by 8 1/4 inches with wide untrimmed margins, full title/index page with an engraving of St. John's Gate, great condition.