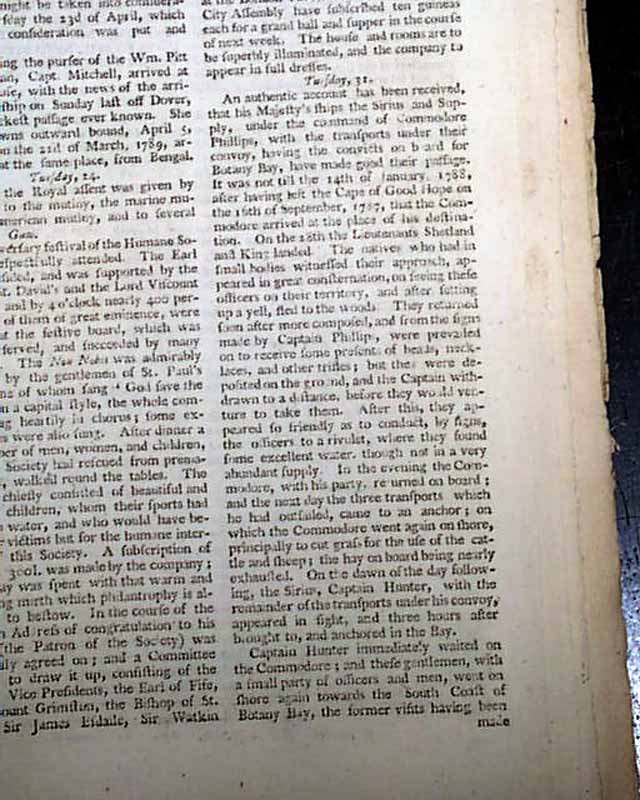 By far the most significant item is the first detailed account in print (London Chronicle of Feb. 24 gives a one sentence report) of the settlement at Botany Bay by Captain Arthur Philips. The article takes approximately 2 1/2 columns and includes details of the first arrival in the bay, the first aboriginal contact, war with the aboriginals during which 3 settlers are killed, La Perieux (La Perouse) arriving, first courts, women convicts trying to get away with the French, etc.
The report is found near the back under: "Domestic Occurrences" and begins: "An authentic account has been received that his Majesty's ships the Sirius and Supply, under the command of Commodore Phillips...having the convicts on board for Botany Bay, have made good their passage..." followed by much detail (see). An extremely significant issue in Australian history being the first report after the landing.
Included are 2 of 3 plates called for (see).
Complete in 96 pages, 5 1/2 by 8 3/4 inches with wide untrimmed margins, full title/contents page featuring an engraving of St. John's Gate, great condition.