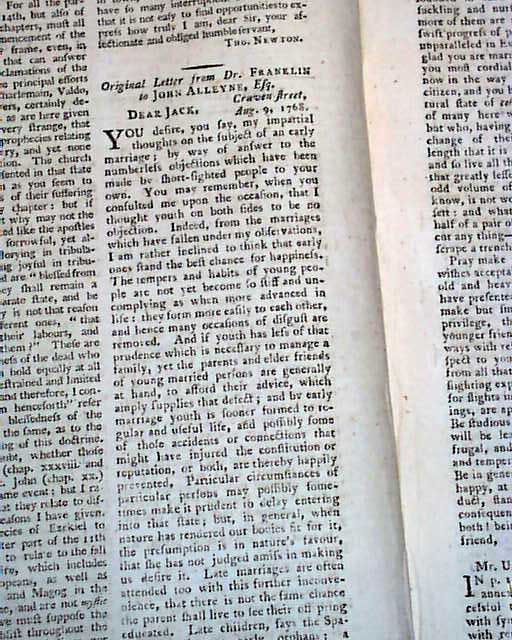 Item # 640614 GENTLEMAN'S MAGAZINE, London, England, May, 1789  Certainly the most significant---and very historic--report in this issue is the account under the heading "America" of George Washington being elected the first President of the United States. The full text can be seen in the photos, however portions include: "The 4th of March, being the day appointed by the ordinance of Congress for proceedings to commence under the new Federal Constitution, the morning was ushered in by a discharge of 14 cannon...it was found that George Washington, Esq. was unanimously elected President, and John Adams, Esq. with a very few dissidents, Vice President, of the United States. These appointments had diffused the most universal transports of joy & the immediate adoption of such measures as should secure unanimity at home & respectability abroad, was expected."
When such an account in an American newspaper would command in excess of $5000, having this same report in a period, English language periodical becomes increasingly desirable because of its affordable price.
Among other items of interest are an: "Original Letter from Dr. Franklin to John Alleyne, Esq." concerning early marriages, dated 1768 & signed in type: "B. F." Also a report from Botany Bay (Australia) which reads: "Capt. Collins, lately arrived from Botany Bay...has been reported that the natives are more ferocious than was at first apprehended, & that they kill the white men whenever they can master them. The Friendship transport, after losing 11 men in her passage, has been obliged to be sunk." This is a very early report on the settlement of Australia by Europeans.
Contains 2 of the 3 full page plates called for.
Complete in 96 pages, 5 1/2 by 8 3/4 inches with wide untrimmed margins, full title/contents page featuring an engraving of St. John's Gate, great condition.