Home > Back to Search Results > A voyage around the world...
Click image to enlarge 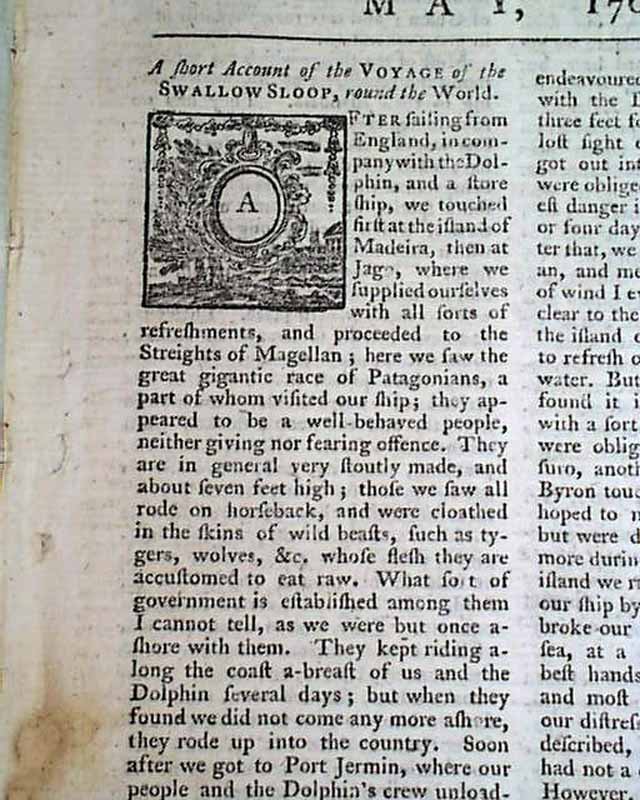 A voyage around the world...

Item # 640466 THE GENTLEMAN'S MAGAZINE, London, May, 1769  The first five pages of this issue are taken up with: "A Short Account of the Voyage of the Swallow Sloop Round the World" which includes much descriptive text (see for beginning). a note on a pamphlet titled: "The true constitutional Means for Putting an end to the disputes between Great Britain & the American Colonies" notes that "This writer proposes to lay a tax upon all the lands possessed by British subjects in America..." with a bit more (see).
Near the back is the "Historical Chronicle" which has the latest news reports of the day. No plates are called for in this issue however there is a print showing the "A Representation of the Apparent Positions of the Planet Venus..." on one of the pages (see).
Complete in 56 pages with a full title/contents page featuring an engraving of St. John's Gate, 5 by 8 1/4 inches, very nice condition.

A very nice magazine from during the midst of troubles leading to the Revolutionary War from the "mother country" with a wide range of varied content including news of the day, political reports, literary items, and other unusual tidbits. This was the first periodical to use the word "magazine" in its title, having begun in 1731 and lasting until 1907.