Home > Back to Search Results > Trouble in America... Plate of an erupting Mt. Vesuvius...
Click image to enlarge 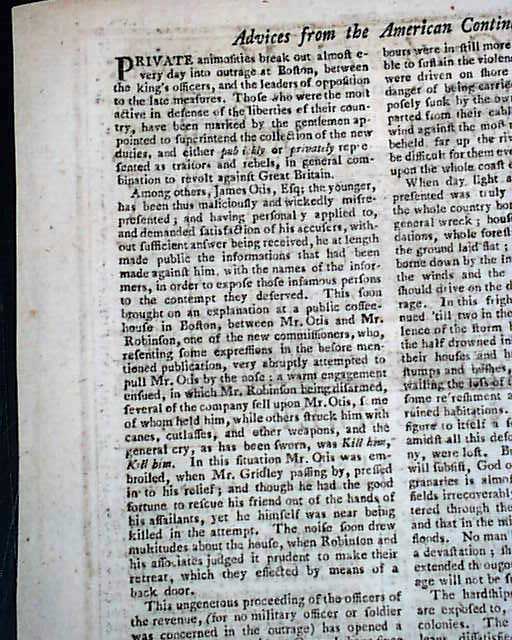 Trouble in America... Plate of an erupting Mt. Vesuvius...

Item # 640259 THE GENTLEMAN'S MAGAZINE, London, November, 1769  The reverse side of the title/contents  page is entirely taken up with: "Advices  from the American Continent" which begins: "Private animosities break out almost every day into outrage at Boston between the king's officers and the leaders of opposition to the late measures..." with much more (see).
Other articles in this issue include: "Observations on the Putrid Sore Throat in America" which takes over 2 pages; "Curious Account of the late Eruption at Vesuvius" which includes a plate folding out to ten inches showing 4 prints of it (see), and much more. Near the back is the "Historical Chronicle" which has the latest news reports of the day.
The Mt. Vesuvius plate is the only plate called for in this issue.
Complete in 48 pages with a full title/contents page featuring an engraving of St. John's Gate, 5 1/2 by 8 3/4 inches with wide untrimmed margins, very nice condition.