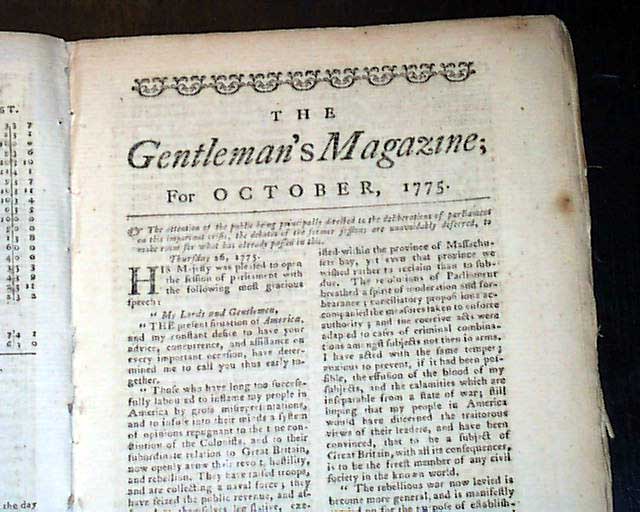 Item # 640178
GENTLEMAN'S MAGAZINE, London, October, 1775  The first several pages contain a nice account of Parliamentary discussion concerning the troubles in America, a portion including: "...the rebellious war now levied is become more general, & is manifestly carried on for the purpose of establishing an independent empire. I need not dwell upon the fatal effects of the success of such a plan..." with much more.
Another article headed: "Independence not the Aim of the Americans, Asserted." takes three-quarters of a page.
There are several letters on modes of treatment of the Americans "on the present critical occasion". Other related articles are headed: "Petition of Bristol Merchants in Favour of the Americans." and "Account of the Proceedings of the American Colonists..." this latter article taking over 3 pages.
Within the "Historical Chronicle" near the back is a letter to the London Lord Mayor from the Congress at Philadelphia which is signed in type: John Hancock, President (see) taking over half a column and includes: "...a cruel war has at length been opened against us, & whilst we prepare to defend ourselves...we still hope that the mediation of wise & good citizens will at length prevail & restore harmony & peace...", but of course this would not happen.
Lacking the map of Boston called for.
Complete in 48 pages, full title/contents page featuring an engraving of St. John's Gage, 5 1/2 by 8 3/4 inches with wide untrimmed margins, great condition.