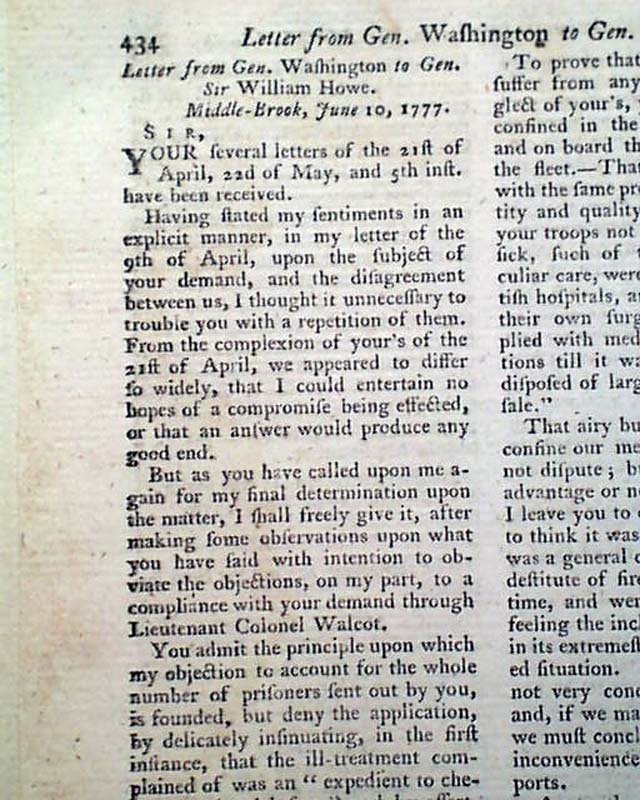 Over 2 1/2 pages are taken up with: "Letter from Gen. Washington to Gen. Sir William Howe" from Middlebrook, June 10, 1777, signed by him in type: Geo. Washington. This is followed by another letter from Washington to Howe, which begins: "The fortune of war having thrown Major-General Prescot in our hands, I beg leave to propose his exchange for Major-General Lee..." signed in type: G. Washington.
Further on is: "Letters from Gen. Washington to the Congress on the Removal of the King's Troops from the Jerseys" is actually several letters, one of which begins: "I have the honour & pleasure to inform you that the enemy evacuated Brunswick this morning & retired to Amboy, burning many houses as they went." Another letter begins: "On Thursday morning Gen. Howe advanced with his whole army in several columns from Amboy as far as Westfield..." (see).
Of historical significance is: "Gen. Schuyler's Letter to Gen. Washington giving an Account of the Surrender of Ticonderoga" datelined Saratoga, July 7, the day after the battle (see). Also: "General St. Clair to Congress" with even more detail on the surrender of Ticonderoga, he being the commanding officer, signed: Ar. St. Clair. This is followed by a letter from Burgoyne from Fort Edward taking over half a page & signed: J. Burgoyne.
Of great significance is: "Copy of a Manifest of General Washington...to General Burgoyne's Proclamation" [see August issue for Burgoyne's Proclamation] in which Burgoyne extols his intentions in America as he advances south through the Hudson valley from Canada to New York City. Washington's response--printed in this issue--extols the American cause, beginning: "The associated armies of America act from the noblest motives, and for the purest purposes. Their common object is liberty..." (see). It is signed in type: George Washington.
Further on is a letter from Captain Pearson from Quebec which includes: "By the last accounts from General Burgoyne's army...they were encamped at & near Fort Edward; which place the rebel army...then retired towards Saratoga. General Arnold has lately joined & now commands their northern army...General Burgoyne...all well & in great spirits, proposed marching on the 5th to attack them."
Includes two plates, one of which is not called for in this issue but does have a related article.
Complete in 54 pages, 5 3/4 by 8 3/4 inches with wide untrimmed margins, full title/contents page with an engraving of St. John's Gate, great condition.