Home > Back to Search Results > Catholic church vs. Nazi regime in Germany...
Click image to enlarge 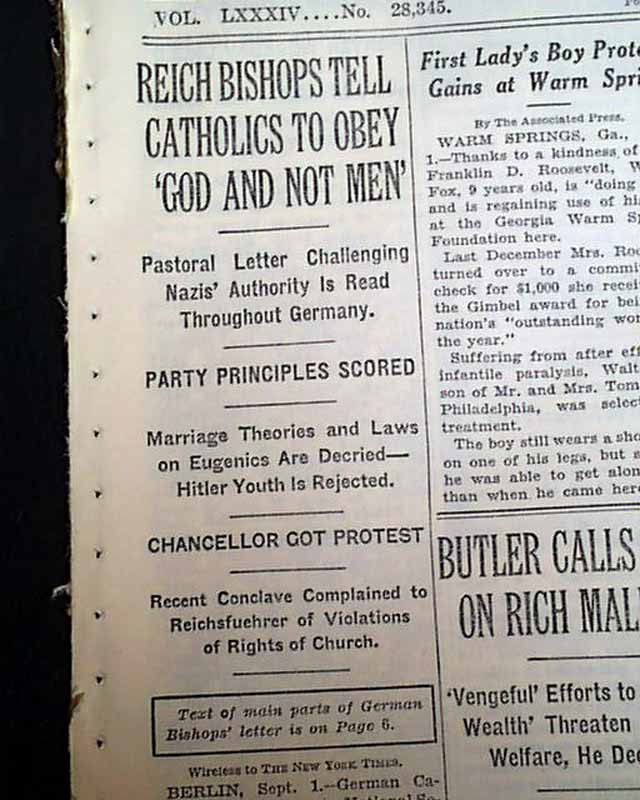 The top of the front page has a one column heading: "REICH BISHOPS TELL CATHOLICS TO OBEY 'GOD AND NOT MEN'" with subheads. (see) Text of the letter is on page 6.
wikipedia notes: A pastoral letter was read in every Catholic church in Germany defying the Nazi regime. "If the laws of the state are in contradiction to those of the nation and to God's commandments, then God's word must be heeded by the faithful", the letter read in part. "There is lots of talk in official Germany against 'political Catholicism', but there is little talk of politicians who interfere in church matters. There is a danger that the slogan 'political Catholicism' will make some official elements believe they can do as they please, forbidding processions and the ringing of church bells, and arresting nuns and monks without legal investigations. This is in open contradiction to the concordat."
Other news, sports and advertisements of the day. complete in 30 pages, this is the rare rag edition that was produced on very high quality newsprint, with a high percentage of cotton & linen content, allowing the issues to remain very white & sturdy into the present. Given the subscription cost, libraries & institutions rather than individuals were the primary subscribers of these high-quality editions. Nice condition.