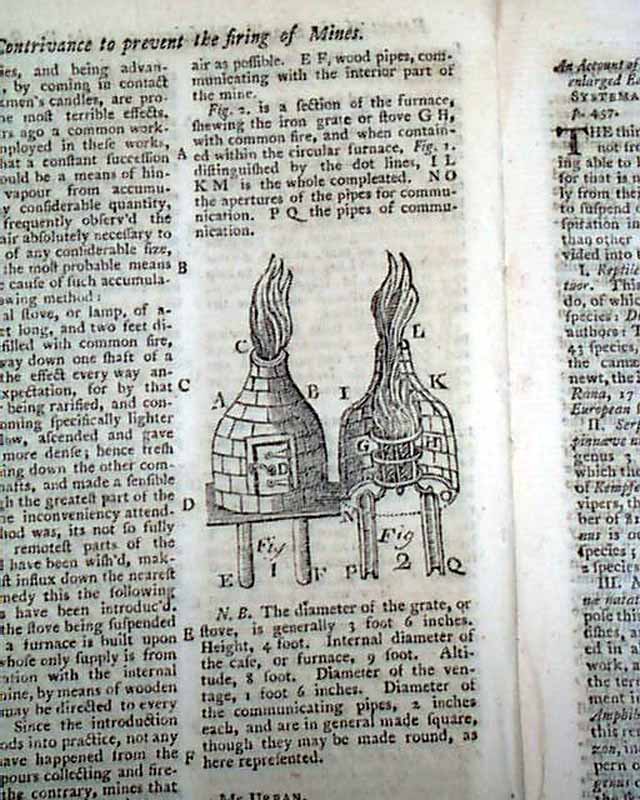 The most notable item in this issue is the very nice & detailed full page map of the St. Lawrence River and present-day city of Quebec, titled "An Authentic Plan of the River St. Laurence from Sillery to the Falls of Montmorency." (see). The map is in nice condition measuring 5 by 8 1/2 inches, & has the locations of the various military encampments and ships in the river, providing much detail. A facing page has the "Explanation of the References in the Plan of the River St. Laurence". There is also a lengthy article titled: "Instructions by Major General Wolfe in Case of an Invasion" (see for portions).
The "Historical Chronicle" also has several reports concerning the French & Indian War (see). Additionally this issue includes a foldout plate of "An Engine for Sawing piles under Water; An Instrument for Taking Altitudes at Sea; also a Machine for drawing Tire into a Ribbon-loom." measuring 8 1/4 by 10 inches.
Other articles in the issue noted in the table of contents include:
"An Accurate Description of the Island of St. Helena" "Directions for laying out Roads" "Curious History of the Late Comet" "Cruelty in Burning a Body of Negroes"  & more.
Complete in 48 pages, full title/contents page with an engraving of St. John's Gate, 5 3/4 by 8 3/4 inches with wide, untrimmed margins, very nice condition.