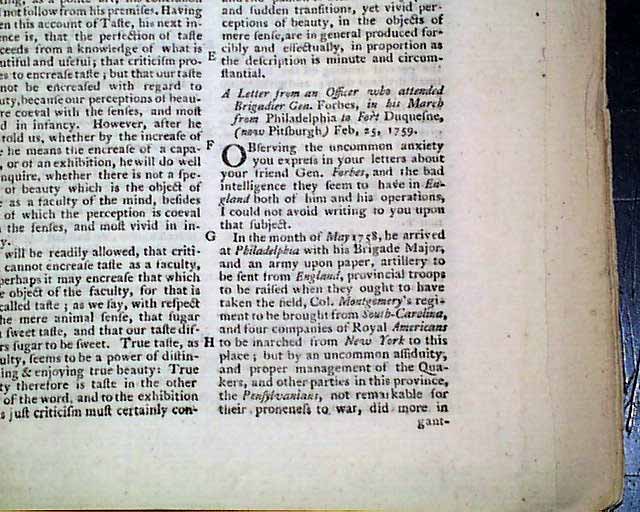 Near the back is an inconspicuous yet quite significant report on the death of famed composer George Frederick Handel. Under the heading: "List of Deaths for the Year 1759 is an entry reading: "Geo. Fred. Handel, Esq; a great musician. He was born in Germany in 1685, and had been in England 50 years."  This report is supplemented by a report of the funeral which reads: "Friday, 20th" "The remains of the late Mr. Handel were deposited at the foot of the Duke of Argyll's monument in Westminster Abbey; the bishop pretends, and the whole choir attended, to pay the last honors due to his memory; and it is computed there were not fewer than 3000 persons present on this occasion."
Another article titled: "A Letter from an Officer who Attended Brigadier Gen. Forbes in his March from Philadelphia to Fort Duquesne" takes 2 1/2 pages and includes a very early (and rare) mention of "Col. Washington" (see) when George Washington was just 27 years old.
This issue also features a foldout map titled: "The Roads of Toulon with the Adjacent Country" as well as a full page plate of various sea shells.
Complete in 48 pages, 5 3/4 by 8 3/4 inches with wide untrimmed margins, full title/contents page with an engraving of St. John's Gage, great condition.