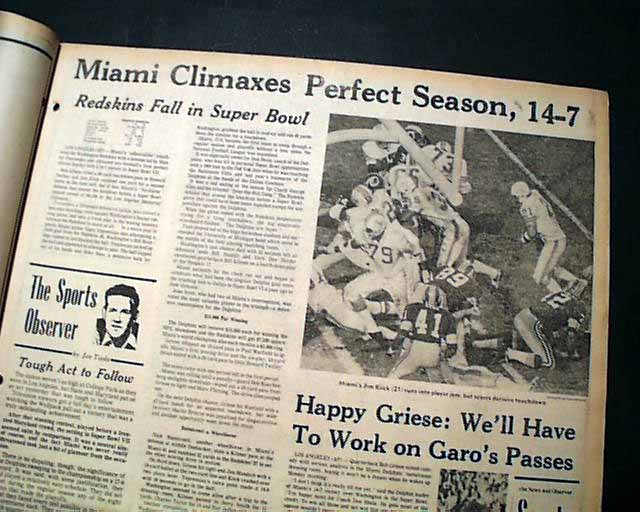 The front page has a small one column heading: "Dolphins Do It!" (see)
The sport's section (page 17) is a banner headline: "Miami Climaxes Perfect Season, 14-7" with subheads and related photo. (see) First report coverage on the Miami Dolphins becoming the 1st and only team in NFL history to end the season ( including Super Bowl) without a loss.
Other news, sports and advertisements of the day. Complete in 34 pages, a few binding holes along the spine, a little front page creasing, generally good.

wikipedia notes: The 1972 Miami Dolphins won fourteen regular season games and three postseason games, including Super Bowl VII, to finish the season 17–0–0. They extended their winning streak the following season to 18 straight wins, until finally losing to the Oakland Raiders on September 23, 1973. Recently, it has often been reported that the surviving members of the 1972 Dolphins would gather to drink champagne when the final undefeated team earned its first loss, or that the team would send a case of champagne to the team that beat the final undefeated team. The head coach of the 1972 Dolphins, Don Shula, denied this in a 2007 interview with ESPN.