Home > Back to Search Results > Attempts for a peace proposal: colonies will not denounce their independence...
Click image to enlarge 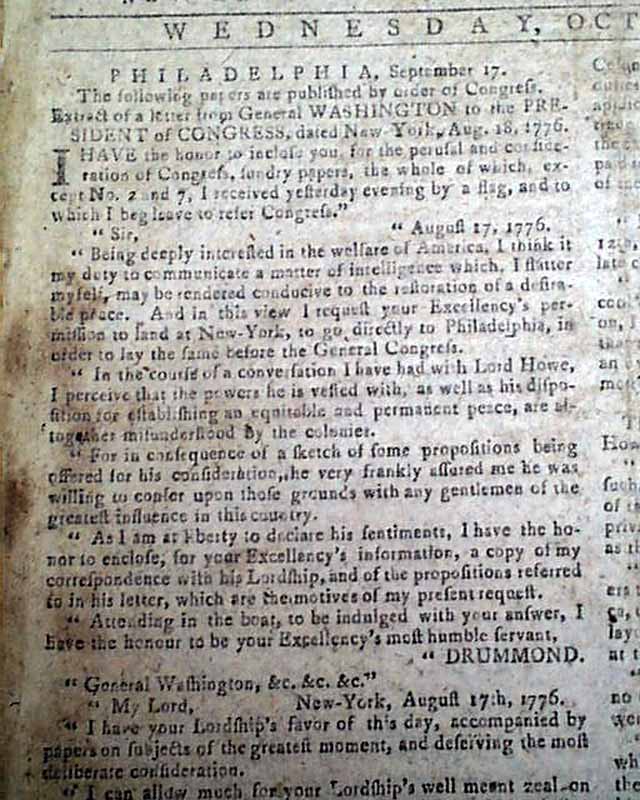 Most of the front page is taken up with several correspondences among Lord Drummon (with proposals for a peace treaty) and George Washington, and the Continental Congress. It begins with  a letter from Drummond dated Aug. 17, 1776 beginning: "Being deeply interested in the welfare of America, I think it my duty to communicate a matter of intelligence...may be rendered conducive to the restoration of a desirable peace...request....permission...to lay the same before the General Congress..." and more, signed: Drummond. This is followed by Washington's somewhat heated response accusing Drummond of violating his parole, refusing to see him, but promises to forward the correspondence to Congress. This letter is signed: G. Washington. What followed are two more letters from Drummond, which of which is quite notable: "Sketch of Propositions Communicated to Lord Howe on the 12th of August, 1776" which has proposals for peace (see), plus a letter signed by Howe, in which he is hopeful the terms will be agreeable to Congress. And then a letter signed by Charles Thomson, Secretary of Congress (see).
Still on the front page is a very notable report from Congress dated September 6, 1776 which includes: "Resolved, that the committee to be sent 'to know whether Lord Howe has any authority to treat with persons authorised by Congress for that purpose in behalf of America...The members chosen, Mr. Franklin, Mr. John Adams, and Mr. E. Rutledge." This was the trio which met with Admiral Howe in the historic peace conference on Staten Island. It proved to be of no avail as Howe demanded a revocation of the Declaration of Independence, not acceptable to the American representatives. Also on the ftpg. is: "The Committee, who were appointed to wait on Lord Howe, having returned to Congress, made their report in the following words.." and what follows is that report--carrying over to page 2--which includes: "...His Lordship then entered into a discourse of considerable lengthy which contained no explicit proposition of peace except one, that the colonies should return to their allegiance and obedience to the government of Great Britain...We gave it as our opinion to his Lordship, that a return to the dominion of Great Britain was not now to be expected...That the declaration had been called for by the people of the colonies...that every colony had approved of it...and all now considered themselves as Independent accordingly..." with more on this, and the rationale as to why this would not happen (see).
Fine, war-related content inside as well including a report of a skirmish in South Carolina, a report datelined "Williamsburgh" with war updates, a letter from Ticonderoga beginning: "A letter from General Gates, enclosing one from Gen. Arnold is just received..." with more; a report from Congress beginning: "Resolved: That eighty eight battalions be enlisted as soon as possible to serve during the present war..." with details, signed in type: John Hancock. Other war-related items as well.
Four pages, never bound nor trimmed, scattered foxing, printed on sturdier than normal newsprint, very nice condition.