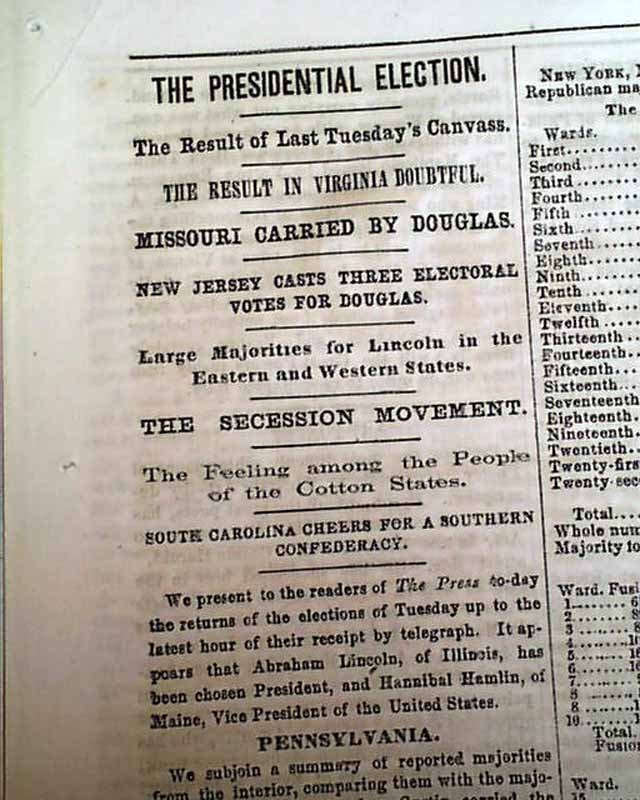 Page 3 has reports and charts on the Presidential election, the first column heads not noting anything definitive: "THE PRESIDENTIAL ELECTION" "The Result of Last Tuesday's Canvass" "The Result In Virginia Doubtful" "Missouri Carried By Douglas" "Lare Majorities for Lincoln in the Eastern & Western States" "The Secession Movement" and more (see). But the editorial on the same page is more definitive: "The Result of the Presidential Struggle" which includes: "...That Abraham Lincoln, of Illinois, and Hannibal Hamlin, of Maine, have been elected to the two highest offices in the gift of the American people, there is now no doubt...Let the incoming administration have a fair trial. If the new President shall do wrong, the laws will punish him...We know nothing of Mr. Lincoln's qualities beyond that which has been written & spoken of him by his organs & friends..." & much more.
Page 6 has: "The Pony Express for California" with a Fort Kearney dateline, including: "...extra of the Pony Express left here for Carson's valley...carrying the result of the election..." (see).
Eight pages, never bound nor trimmed, two folds, nice condition.