Home > Back to Search Results > The Emancipation Proclamation... In a pro-South newspaper...
Click image to enlarge 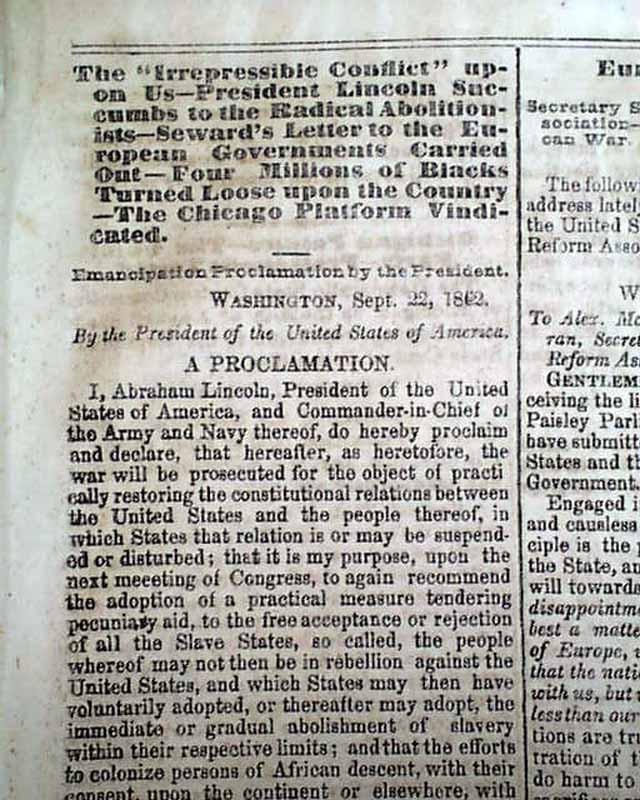 The Emancipation Proclamation... In a pro-South newspaper...


THE CRISIS, Columbus, Ohio, Sept. 24, 1862  Given the focus of this controversial newspaper, being supportive of the Southern cause while publishing in the North, it is particularly noteworthy that this issue contains on page five the Emancipation Proclamation whereby President Lincoln would free the slaves on January 1 of the coming year.
The introductory subheads would be of no surprise as well: "The 'Irrepressible Conflict' Upon Us--President Lincoln Succumbs to the Radical Abolitionists--Seward's Letter to the European Governments Carried Out--Four Millions of Blacks turned Loose upon the Country--The Chicago Platform Vindicated". Then what follows is: "Emancipation Proclamation by the President" "By the President of the United States of America - A PROCLAMATION" followed by the complete text of this historic document, signed at its conclusion by the President; Abraham Lincoln (see).
Equally as interesting is the editorial which appears on the facing page, headed: "The President's Proclamation Freeing the Slaves", and which begins with a statement that could be expected in any Confederate newspaper: "We have at last hit upon the lower round of our national existence. The abolition fires which have burnt to the very core of the nation's heart, have at last burst to the surface & spread over the whole land. Sad is our fate and monstrous the depths to which we are precipitated..." with more (see).
Fascinating to have this significant anti-slavery document printed in a pro-slavery newspaper!
Eight pages, even toning throughout, nice condition.

Described as "The Hottest Rebel Sheet to be found in the North or the South", it opposed the war and attracted the hatred of the Republicans and the Lincoln administration. It insisted that slavery could not be prohibited by law. So obnoxious was this paper to unionists that it was denied circulation in some cities. In 1863 the press was raided by a hateful mob.
Much other interesting content as well, but it pales in comparison to the reports noted above. Eight pages, various light foxing, two old tape mends not affecting mentioned reports.