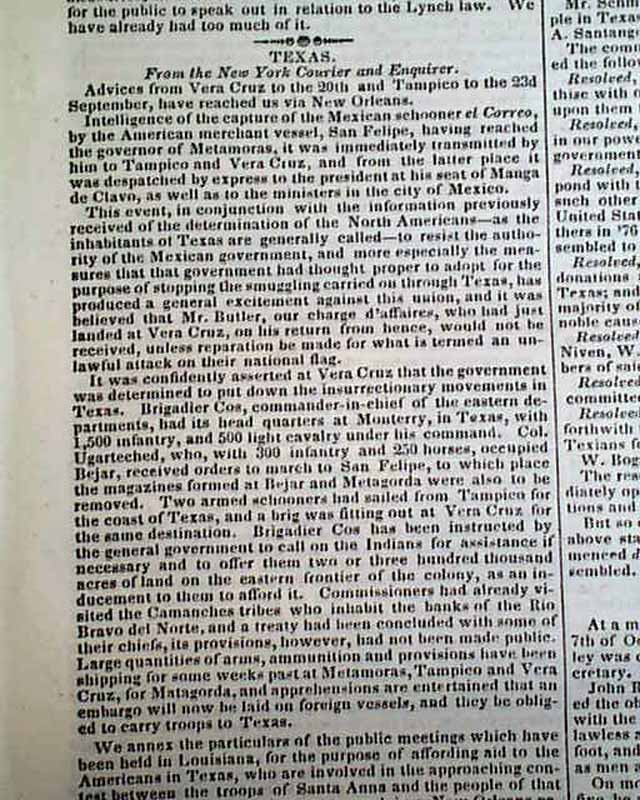 Inside has 2 1/2 pages of news under the heading: "Texas" concerning events from the beginning of their war for independence. The reports seem to be a result of the Battle of Gonzales (first battle of the Texas war for independence) but there is no direct reference to it. Included are: "....It was confidently asserted at Vera Cruz that the government was determined to put down the insurrectionary movements in Texas..." and "Whereas, the rights & liberties of our fellow countrymen of the neighboring province of Texas are endangered by the violent & despotic course of general Santa Anna..." with more. Included also is a letter: "To his Excellency Andrew Jackson, President of the U.S." which is signed in type by  7 men, including Samuel Houston.
Yet another item includes: "A WAR OF EXTERMINATION has commenced in Texas, and our fellow countrymen are to be driven (if assistance is not rendered), AT THE POINT OF THE BAYONET from their homes & fire sides!..." (see).
There is also much on the needed protection from Indians in the vicinity, which also is related to the Battle of Gonzales.
Sixteen pages, 6 1/4 by 9 3/4 inches, very nice condition.