Home > Back to Search Results > Death of George Washington with an engraving of his coffin...
Click image to enlarge 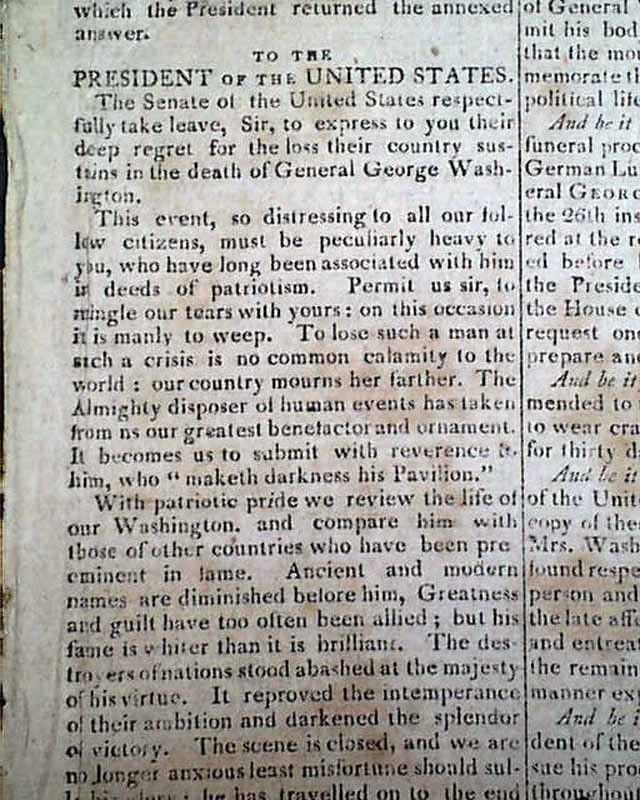 Death of George Washington with an engraving of his coffin...

The front page begins with a nice letter from "The Senate...To the President of the United States" noting that they wish: "...to express to you their deep regret for the loss their country sustains in the death of General George Washington..." with much more. This is followed by the: "President's Answer" to the Senate, signed in type: John Adams. Then a report from the House of Representatives discussing: "...a suitable mode of commemorating the death of General Washington..." Also another letter concerning the death of Washington.
But certainly the great content is on page two where is found most of a column black-bordered which has details on the: "Funeral Of General Washington", and which includes an engraving of his coffin, noting the position of the pall bears to each side (see). A pg. 2 report includes: "The melancholy news of the death of the illustrious Washington, has, like an electric shock, penetrated every American heart & filled it with deep sensations of grief..." with more. Of special interest is the official letter from Washington's physicians headed: "Gen. Washington's Illness" which has much detail. A few bits include: "Some time in the night of Friday, the 13th instant, having been exposed to a rain...Gen. Washington was attacked with an inflammatory affection of the upper part of the wind pipe...The necessity of bloodletting suggesting itself to the General, he procured a bleeder...took from his arm in the night 12 or 14 ounces of blood...The power of life seemed now manifestly yielding to the force of the disorder,...till  at half after eleven on Saturday night, retaining the full possession of his intellects--when he expired without a struggle!..." with more, signed in type by his physicians: James Craik, and Elisha C. Dick.
Nice to have such a report in a newspaper from the month he died as many first reports in more distant cities did not report his death until January.
Four pages, some scattered foxing, nice condition.