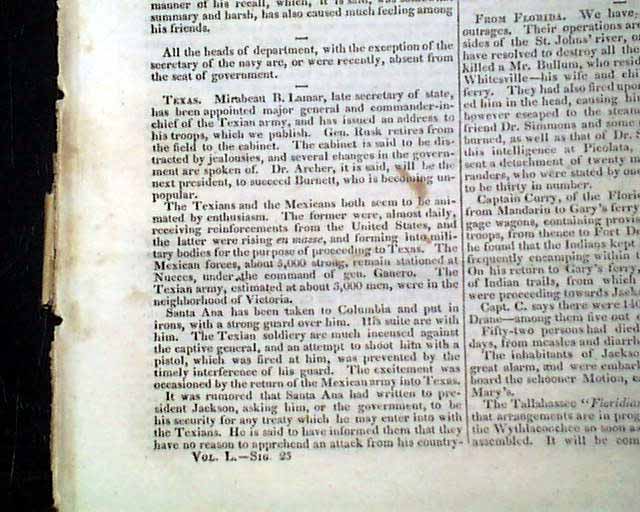 A front page item headed: "Texas" includes: "...the Texians & the Mexicans both seem to be animated by enthusiasm. The former were receiving reinforcements from the United States & the latter were rising en masse & forming into military bodies for the purpose of proceeding to Texas...the Texian army, estimated at about 3,000 men, were in the neighborhood of Victoria...Santa Ana has been taken to Columbia & put in irons, with a strong guard over him...the Texian soldiery are much incensed against the captive general & an attempt to shoot him with a pistol, which was fired at him, was prevented by the timely interference of his guard...it was rumored that Santa Ana had written to president Jackson asking him...to be his security for any treaty which he may enter into with the Texians..." There is another article headed: "Santa Ana" also on the front page, which mentions: "...he deserved the most ignominious death...".
Inside is: "Address of Gen. Lamar to the Army of Texas" which takes over a full column. Other items include: "The Shoe Trade" "A New Locomotive Engine" "The United States & Mexico" "Treaty With Venezuela" and "Washington's Farewell Address" which is the letter to James Madison from Mt. Vernon, May 29, 1779, signed: George Washington.
Sixteen pages, 6 1/4 by 9 1/2 inches, nice condition.