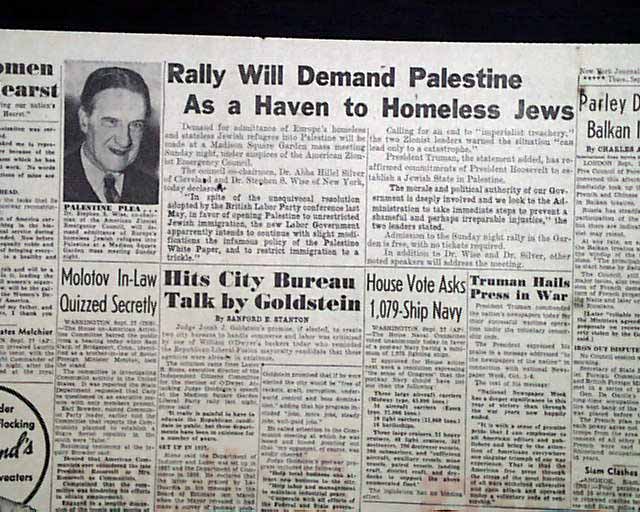 
NEW YORK JOURNAL AMERICAN, September 27, 1945  The back of the front page has a 4-column heading: "Rally Will Demand Palestine As a Haven to Homeless Jews", which includes in part: "The council co-chairman, Dr. Abba Hillel Silver of Cleveland and Dr. Stephen S. Wise of New York, today declared: 'In spite of the unequivocal resolution adopted by the British Labor Party conference last May, in favor of opening Palestine to unrestricted Jewish immigration, the new Labor Government apparently intends to continue with slight modifications the infamous policy of the Palestine White Paper, and to restrict immigration to a trickle.'" The article continues: "Calling for an end to 'imperialist treachery,' the two Zionist leaders warned the situation 'can lead only to a catastrophe.'" The front page has the unrelated full-banner heading: "1st M'Arthur and Hirohito Photos."
Front leaf only, in good condition.