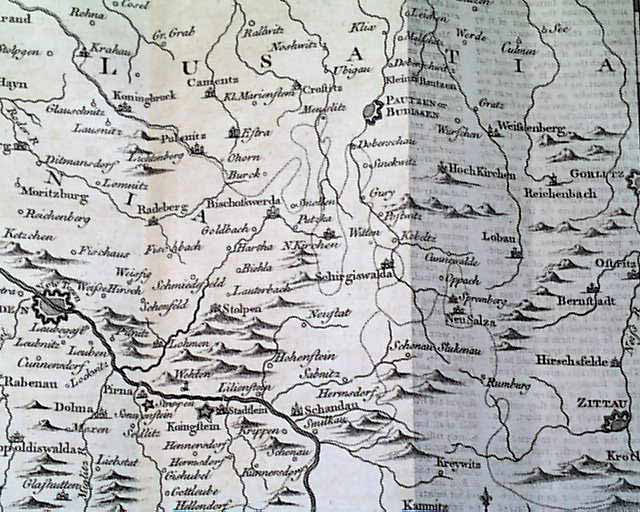 The prime feature of this issue would be the three maps included, although only one is called for (other two meant for the Supplement). One is a  very nice foldout map titled within the cartouche: "A Map of the New Continent According to its Greatest Diametrical length from the River la Plata to beyond the Lake of the Assimiboils" (see). This map shows both North and South America. North America is somewhat crudely done, particularly the West, obviously due to limited familiarity of that part of the world (see). This map measures 8 1/2 by 10 inches and is in great condition.
The second map is: "A Complete Chart of the Coast of France from Ostend to Cape Finistrerr, including the Opposite Coast of the British Channel", folding out to 8 1/2 by 10 1/4 inches. Great condition also (see).
The third map is the one actually called for in this issue: "A Map of the Country Round Dresden, with the towns and fortresses..." showing a portion of present-day Germany. It folds out to 8 1/4 by 10 inches and is in very nice condition.
Near the back is the "Historical Chronicle" which has various news events of the day. Included is a report noting: "Advices from America bring an account of a repulse, which the enemy met with, in an attack which they made upon the advanced guard of Gen. Forbes at Loyal Hanning, in the road to Fort du Quesne...happy omen of an entire conquest of the place, which is earnestly wished..." with just a bit more (see).
Among many other articles of interest are: "The Geography of the Earth Considered in a New Light with a View to Future Discoveries" & "Description of the Maritime Towns of France".
Complete in 46 pages, 5 by 8 inches with a full title/contents page with an engraving of St. John's Gate. Never bound nor trimmed with wide margins, and in great condition.