Home > Back to Search Results > Battle of Fredericksburg in a Confederate newspaper...
Click image to enlarge 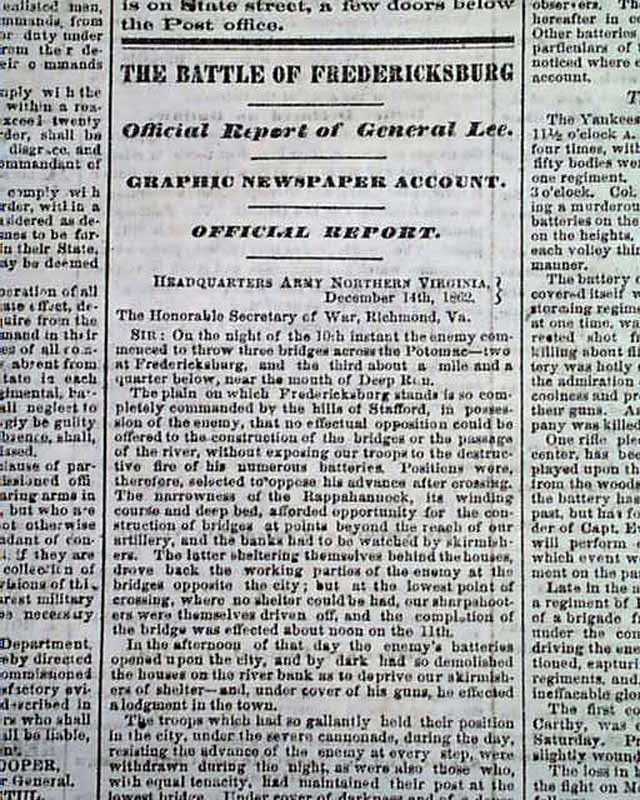 Battle of Fredericksburg in a Confederate newspaper...

If the title and city of publication seem to indicate an error, but  there is not one. This newspaper had a fascinating history during the Civil War. Memphis was a Confederate stronghold up through the Battle of Memphis on June 6, 1862, at which time the Yankees moved in and it became a Yankee city. Being a strong voice for the Confederacy, the "Memphis Appeal" newspaper would not continue under Yankee control. As Wikipedia notes: "...On June 6, 1862, the presses and plates were loaded into a boxcar and moved to Grenada, Mississippi, where it published for some time. The Appeal later journeyed to Jackson, Mississippi, Meridian, Mississippi, Atlanta, Georgia, and finally Montgomery, Alabama, where the plates were destroyed on April 6, 1865, only days before the Confederate surrender, halting publication of what had been one of the major papers serving the Southern cause." So this one newspaper published in six different Confederate cities during the Civil War.
The front page has nearly two columns with detailed text on: "The Battle of Fredericksburg" "Official  Report of General Lee" "Graphic Newspaper Account" "Official Report" which includes the document signed in type: R. E. Lee, General. Among subheads in this report are: "Birds-eye View of the Battle Field" "Graphic Description of Saturday's Fight" "Particulars of the Death of General Cobb" "The Storming of the Hill" and "The Battle". Also on the ftpg. are: "On The Wing" "Interesting Diplomatic Lecture" and "Letter From Fredericksburg" among other smaller items. There are also several military notices including: "Important to Absent Soldiers" (see).
The back page includes an interesting & optimistic editorial headed: "Day Breaking" and beginning: "The signs in the political firmament are day by day becoming more cheerful & promising. The black clouds of war that for near 2 years have darkened our country's horizon are beginning to break & let through the cheering beams of hope & promise. The Federal army of the Potomac has been sorely defeated & discomfited..." with much more (see photos). Also on the bkpg. are: "The Battle of  Hartsville" "Movements Against Arkansas" "The Right of Secession Admitted" "Glorious Intelligence" "From the North--A Signal Defeat Acknowledged--Gen. Burnside's Official Report--A Dissolution of Lincoln's Cabinet" and much more.
Complete as a single sheet newspaper of folio size, much Civil War reporting plus advertisements as well. A tiny worm hole near the center affects just 2 words, minor closes-trimming in the bottom portion of the back page leaf touches letters in ads only, otherwise in very nice condition.
A rare opportunity for a Confederate newspaper printed in Jackson, Mississippi, its third city of publication during the Civil War.